The bachelor party is a time-honored tradition. Every weekend across America, countless men on the brink of their wedding dates are taken out by a select few of their best buddies for a symbolic last hurrah. “Just a few friends getting together,” says Todd Phillips, director of Warner Bros.’ new raunchy comedy “The Hangover.”

“It’s such a typical thing to do, they don’t even want to call it a bachelor party because they see it more as a guys’ night out,” he adds. “A nice dinner, some laughs, and a toast to the new groom.” You know, “Harmless.” 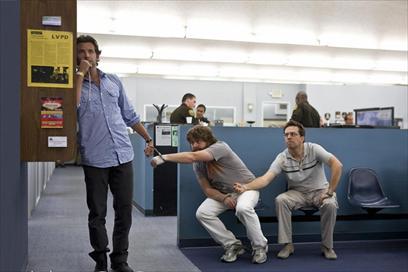 Granted, this night out in “The Hangover” is awfully close to the day of groom Doug’s (Justin Bartha) actual ceremony… And sure, Stu (Ed Helms) has to lie to his girlfriend about where they’re going…

And yes, they’re taking along Doug’s new brother-in-law Alan (Zach Galifianakis) who’s socially awkward and somewhat of a loose cannon…But other than that, what do they have to worry about?

When the foursome checks in to Caesars Palace they’re feeling good and relaxed. Stepping out onto Caesars’ rooftop to start their evening with a toast amidst the wraparound glow of Vegas lights under the desert sky, they raise their glasses to Doug’s upcoming new life and “to a night the four of us will never forget.”

And that’s the last thing any of them can remember.

The next thing that Phil (Bradley Cooper), Stu and Alan know it’s morning and they’re sprawled out with their faces on the marble floor. Sunshine streams in through the windows, revealing a palatial suite that is totally trashed. 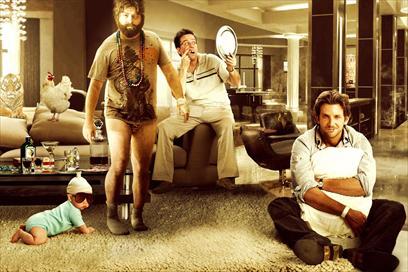 But that’s not so unusual, as bachelor parties go, Phillips grants. “Getting drunk and waking up next to a pile of empty bottles is pretty much par for the course. For a movie about a hangover to end all hangovers, we had to take things a gigantic step beyond. We thought, ‘What would be the craziest night you could possibly have and still live to talk about it.’”

“How about, there’s a baby in their room, that they’ve never seen before, and a tiger in the bathroom?,” adds producer Dan Goldberg. Party dolls bob atop the Jacuzzi bubbles, a chair still smolders from what appears to have been a fire and an ottoman dangles from the ceiling.

Oh, and one more little thing… the groom is missing.

As the three revelers struggle to regain consciousness, each reacts to the scene in his own way. Leader-of-the-pack Phil surveys the damage with a confident but blurry eye, assumes they had a good time and that Doug will turn up soon. Stu, the worrier, and the one whose credit card is on file with the front desk, launches into a panic that escalates with each new offense he uncovers in the wreckage of their $4,000-a-night suite. And Alan kind of takes it all in with a crazy sense of wonder—that is, once he gets over the fact that he was just standing, half naked, within pouncing distance of a real, live, full-grown tiger.