Irene Emma Villamor teams up once again with Bella Padilla on a film that lures you in with a premise that reads like a romantic drama but as it continues to unfold, it reveals itself to be a completely different movie altogether. ‘On Vodka, Beers, and Regrets’ begins innocently enough: a problematic actress whose career is on the decline hits the bars and gets drunk to deal with her sorrows until she finds herself in a hotel room and being cared for by a struggling musician.

This meet-cute is subverted when we discover that this is not the first time that Jane, the actress, and Francis, the musician, have met. She had gotten drunk during his set the night before and he took care of her and helped her to the car of a fellow actor played by Matteo Guidecelli. 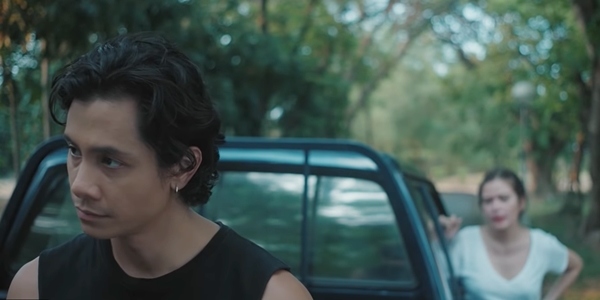 The connection between the two is palpable, though, and Francis keeps coming back to Jane as her life spins out of its axis. He’s falling in love as she is falling out of grace in the industry.

This is not a love story as one would come to expect from its first act. This is a story about alcoholism. The film’s title, ‘On Vodka, Beers, and Regrets,’ is a literal litany of Jane’s obstacles for any semblance of normalcy or balance. The camera is focused solely on Jane as she struggles with the day-to-day of her life and how easily she slips into the refuge of the bottle.

Jane is completely within Bella Padilla’s wheelhouse. This is the third time that Padilla and Villamor are working together and you can tell that Villamor knows exactly all of Padilla’s strengths as an actress and the trust between the two creates a space for Padilla to really push the boundaries of what she can do.

To be honest, this is nothing new from Padilla. I’ve seen this in ‘Meet Me in St. Gallen,’ and ‘Camp Sawi,’ and ‘The Day After Valentine’s’ but this is the strongest she’s been. She’s fragile and vulnerable in every scene. She’s honest and completely bare as her portrayal of Jane is constantly building walls that gets torn down the moment she realises she’s done something wrong.

On the opposite end, JC Santos once again shows how reliable and generous he is an actor, delivering a very moving performance of a man who is trying his best to love someone who is deteriorating right before his eyes. The love is corny, he’s a sentimental and romantic character, but JC makes it real and believable. He is the tender heart of this film, which allows Padilla to completely crumble scene-by-scene. 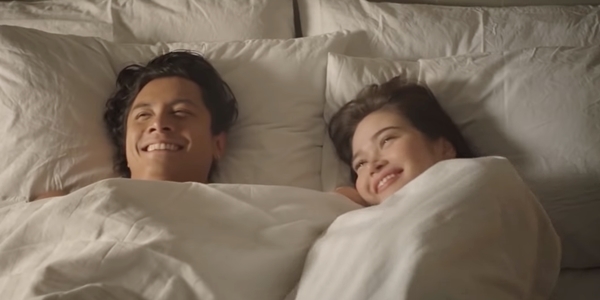 Added to the mix are strong performances by Rio Locsin and Kean Cipriano, but it is Guidecelli who delivers another surprising performance (much like how he stole the show in ‘Mina-Anud’) that comes unexpectedly and comes off as very formidable.

Irene Emma Villamor is a fine form here, presenting this powerful narrative in a solid 94-minutes that never dawdles or over extends the scenes and the drama. There’s lapses in the story telling, jumping quickly from one moment to the next and it feels very much like blacking out. Even the big reveal at the beginning that Jane and Francis have met before truly tries to capture the feeling of not being in control.

There’s a gloss in the cinematography, beautiful shot transitions from moment to moment, and the story unfolds only through scenes that need to be seen. The economy of the storytelling in ‘On Vodka, Beers, and Regrets’ is a masterful display of Villamor’s directorial skill. She is unafraid to get really close to her characters even as much as Jane puts up walls and as much as Francis wants to break through them.

There’s no real semblance of a clear plot. There’s no great big destination that these characters are driving towards. They are just living their lives but you can feel that it’s coming towards something and this is a testimony to the strength of Villamor as a screenwriter and director.

Over and over, I keep catching Villamor’s films from ‘Camp Sawi’ to ‘Sid & Aya’ and ‘Ulan’ and I’m just falling in love with her filmography more and more. This is a strong addition to an already impressive list of work. The unabashedly direct way with which she tackles alcoholism and the way she presents it through Bella Padilla’s courageous performance is another winner in my book.

Find showtimes for 'On Vodka, Beers, and Regrets' and book your tickets in advance!