The Kingmaker explores the disturbing legacy of the Marcos regime and examines the Marcos family’s improbable return to power in the Philippines. 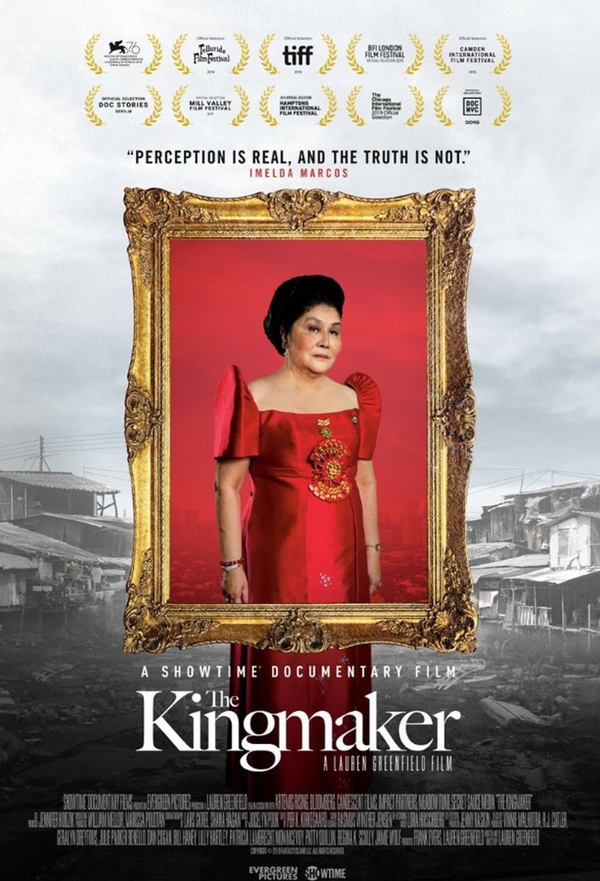 And this month, in cooperation with the De La Salle University-Taft, it comes to the Cultural Center of the Philippines.  The screening is under the CCP Arthouse Cinema program.

The Cultural Center of the Philippines is a 50-year-old edifice built through the initiation of the Former First Lady Imelda Marcos.  In September 1969, after the decades-long quest of countless Filipino artists and government officials, the CCP rose on a reclaimed land along Roxas Boulevard and served as a beacon of Philippine arts and culture.  It opened its doors for the premiere of “The Golden Salakot: Isang Dularawan.”

In 1986, the CCP re-invented itself to become a people’s art center.  Filipino works were given priority, while outreach programs and regional artmaking became one of the main focuses.  Access to artworks and performances was de-centralized.

It has been its mandate to present good and relevant arts – in this case, film - for its audience.  Part of its mission is to bring in rich and varied contents from local and international filmmakers.

CCP VP-artistic director Chris B. Millado said “the CCP as a government cultural institution has a contentious history, so it cannot be denied that Imelda founded this during the Marcos years, that Imelda was the main patron for the establishment of this institution.  But it also cannot be denied that the Marcos regime had its excesses in terms of corruption, and its human rights record.  And it also cannot be denied that they have been convicted in courts for this.  By screening this film, it’s a way of making artistic expression engage with issues that we feel are very important to tackle in this part of the political or social psyche of the Filipino.”

“We can’t deny the relations of the center with the Marcoses, but CCP has moved on to become a People’s Art Center.  The CCP has always been a platform for artistic expressions and rational conversations.  We are presenting a documentary tackling an issue that we are concerned about, as a Filipino people,” said Millado.

The idea of creating a documentary on the Marcoses began when Greenfield read an article by William Mellor in a Bloomberg magazine about one of the family’s least-known but most bizarre excesses.  In 1976, at the height of their powers, Ferdinand and Imelda evicted more than 1,000 poor inhabitants of a Philippine island and replaced them with a menagerie of African animals shipped 6,000 miles from Kenya in a latter-day Noah’s Ark.

Investigating the untold story of a dictator’s forgotten safari park, Greenfield gained intimate access to Imelda and other members of the Marcos clan, filming in Imelda’s extravagantly-furnished city apartment and the family mansions in Manila and the bailiwicks of Ilocos Norte and Leyte provinces.

“Imelda Marcos, the former First Lady of the Philippines, famed for her addiction to excess, has been an iconic reference in my long-term investigation of wealth through my photography and films.  Astonished that she had managed to re-enter Philippine politics after being ousted by a popular uprising, I began filming her and discovered that, at age 85, she remained a skilled 'political animal,' as her son Bongbong describes her,” said Greenfield in her artist’s statement.

Greenfield’s cameras followed the lavishly funded Marcos vice-presidential campaign from its launch in 2015 through to the election night drama and aftermath.  During this time, Greenfield also conducted moving interviews with victims of the Marcos years, ranging from courageous women activists who had been raped and tortured to an elder Calauit islander who had been evicted from her home to make way for the Marcos’ menagerie.

Soon, Greenfield realized she was onto an unfolding story that would be as topical as today’s headlines.

The film chronicles Imelda’s present-day push to help her son, Bongbong, win the vice-presidency.  To this end, Imelda confidently rewrites her family’s history of corruption, replacing it with a narrative of a matriarch’s extravagant love for her country.  “In an age when fake news impacts elections, Imelda’s comeback story is a cautionary tale,” said Greenfield.

After the screening, there will be a talkback with the film representative and other guests from different sectors.