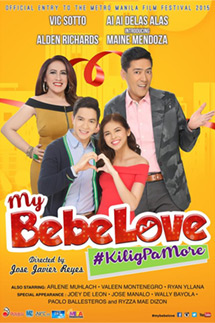 My Bebe Love tries to capitalize of the recent popularity of the phenomenon that is Aldub. “Capitalize” is the key word here, because the movie is almost purely the product of commerce. The film strings together its stars’ endorsements and roughly molds them into the shape of a movie, narrative playing second fiddle to the impulse to promote brands. This is, of course, no way to make a movie. We can certainly do better than this.

Vito (Vic Sotto) and Corazon (Ai Ai de las Alas) are the heads of competing events management companies. The two meet repeatedly over the course of one stressful day, becoming fierce enemies as they fight over a venue. But the two become strange bedfellows when they discover that Vito's daughter Anna (Maine Mendoza) and Corazon's nephew Dondi (Alden Richards) are sort of falling in love. Vito and Corazon team up to prevent the young couple from turning serious, but in the process they end up growing close themselves.

The movie is basically split into two halves. The first half of the picture very slowly brings the two young leads together, painting out a ridiculously chaste version of romance mostly made up of hand holding and talking on the phone. They're keeping it a secret, despite the fact that nothing illicit is actually going on. The film just seems to be recreating the dynamic of the young pairing's TV appearances, relying heavily on the existing fanbase's affection for these two performers.

People who aren't already fans of the two will likely be baffled, because without the context of their history and the circumstances of their coming together, it all just seems terribly forced. Both Alden Richards and Maine Mendoza show plenty of enthusiasm, but there is a weird gap in their energy. It doesn't always feel like they're engaging, even when there's no one else in a scene. The film actually picks up a bit in the second half, when Vito and Corazon take over the story. The two, free of the boundaries of whatever it is that's between Richards and Mendoza, are much more able to convey a growing closeness.

Not that there's really a whole lot to unpack in this story. The narrative almost feels secondary in this film. It feels as though almost every scene was designed specifically to highlight some product that the stars are endorsing. The film is dominated with branding, with some scenes serving no narrative purpose whatsoever. There is a scene, for example, where Vito asks his helper if she's done washing his shirt. This whole setup exists solely to bring attention to the detergent she's using. They even mention the price. The filmmaking as a whole is pretty uninspired, the comedy suffering from a severe lack of coverage and lackadaisical editing.

My Bebe Love is the kind of MMFF film I like least. In a festival that might allow something as terrible as last year's Magnum Muslim, My Bebe Love and its ilk still stand out for being so nakedly and unabashedly devoted to commerce. This movie ends up feeling like an exercise in branding in the shape of a feature film. There is clearly talent here, and maybe even some creative nerve, but it all takes a backseat to the demands of clients who really don't care if the movie is actually good. All that matters is that the brand is on screen, and that it isn’t being actively denigrated. I generally like to believe that our audiences deserve better.