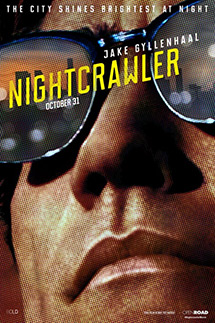 Nightcrawler isn't really about the news business. It's just set in that world, operating in the grimy corners of the news gathering business, taking the pursuit of success in this field to a logical extreme. But in its best moments, Nightcrawler goes beyond those bounds, dissecting the culture that allows for such a horrible system to persist. Nightcrawler is a pulpy, paralyzing depiction of capitalism gone wild, the movie standing as a twisted exploration of the American dream.

When we first meet Louis Bloom (Jake Gyllenhaal), he is a small time crook cutting down a chain link fence to sell it for scrap metal. While driving home one night, he sees a freelance news camera crew taking footage of a car accident on the freeway. Louis decides to make a drastic career change. He acquires a camera and a police scanner and just starts shooting footage on his own. And it turns out that Louis' willingness to go beyond what most would consider ethical or legal behavior makes him well suited for the job.

There isn't really much of an arc to consider here. Right from the start, we recognize that Louis is a sociopath. The film can't take him to any further extreme. It only sets out to document his rise to success in this business, laying out the environment that allows such a horrible individual to do so well. Bloom's dialogue is peppered with the kind of nonsensical business jargon that feels pulled from a book. He sees people only as resources, tools that can take him further towards the path of ultimate success.

The film is best when it doesn’t get specific about the news business. Much of what it says about the news feels trite, the movie’s arguments lacking the sophistication that would make them convincing or even thought-provoking. It sometimes feels like the film is stuck in an echo chamber, repeating points that have been long worn out without ever giving serious consideration to the opposite argument. But there is more to this film than a criticism of the news. The movie is at its best when the news is just a backdrop. What becomes clear as the movie goes on is that Bloom’s approach could likely be employed in any field. The film’s true target is unregulated capitalism, and the culture that has emerged around it.

The film plies pulp flavors as it delves into the darkness of the character’s way of thinking. It presents a grimy, ugly world governed only by the pursuit of success and money, the movie gradually stripping away the vestiges of verisimilitude as it pursues the logical extremes of its main idea. Much of the appeal of this film is due to the performance of Jake Gyllenhaal, who perfectly embodies the main character. There is a hypnotic physical dimension to this performance, Gyllenhall transforming himself into something truly remarkable, yet strangely grounded in reality.

Nightcrawler just keeps building and building, piling on the grime and dark humor as it approaches an almost operatic climax. It is all at once ludicrous and recognizable, the story and its characters guided by principles that are both reprehensible and oddly familiar. Perhaps it spends a little too much time taking shots at the way the news is done, but by the end it makes a far more interesting case. Nightcrawler is a small scale epic of the human condition, taking a good hard look at the culture that allows darkness to thrive.