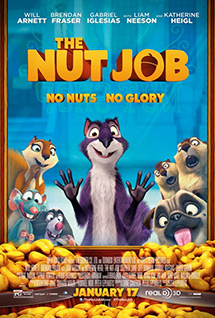 The Nut Job is one of those films where it's clear that the filmmakers couldn't really decide what they wanted to do. There are moments where it feels like a throwback to classic cartoons, with its mid-20th century trappings and elastic physics. But then it just suddenly throws in some Gangnam Style somewhere in there. Subpar animation handicaps the film further, resulting in a final product that isn't remotely compelling.

Surly the Squirrel (Will Arnett) is an outcast among the animals that populate a city park. While the other animals band together to gather food for the winter, Surly is only looking out for himself. When his antics cause the park's food stores to go up in flames, Surly is exiled from the park. He quickly finds it difficult to survive alone in the city. He gets a chance at redemption with the daring heist of a nut shop run by a gang of bank robbers. Surly is at first reluctant to team up with a team of park denizens to get at the nuts, but when he uncovers something more nefarious at play, he soon finds himself playing the hero.

There is potential to the idea of a heist film in the scale of park rodents. It's kind of clever that the heist is paralleled in the scheme of normal human criminals. But the film doesn't commit to the heist movie conceit. Or to anything, really. The movie is remarkably unimaginative for an animated feature, its animal characters unable to do anything extraordinary beyond talking. The heist never comes together on screen, the animals hardly ever doing anything that contributes directly to their inevitable success.

There is some merit to the film's screwball approach to the subject, but it doesn't commit to this either. It moves too slowly, the action never getting frantic enough to really take advantage of the broadness. The unimpressive animation takes some of the blame for this. It feels rigid and flat most of the time, with stiff movement and indistinct character designs.

The film recruits a high caliber roster of starts for its voice work, and it pays off somewhat. But an animated film can't be sustained by vocal performances. Will Arnett comes off as a bit bored delivering his character's stale dialogue. Liam Neeson, Brendan Fraser and Maya Rudolph manage to have some fun with their performances, and that helps out a bit. But their energy isn't enough to push this film forward.

The Nut Job ends with a credit sequence that features an animated version of Korean pop star Psy performing his most famous hit. The characters from the movie come out to dance along with the rotund star, the film offering up one last non sequitur following ninety minutes of disconnected ideas. The film seems overwhelmed by the task of putting together a feature length story. It's just unable to commit to one of its worthy ideas, splitting its time between disparate concepts, adhering to imaginary precepts of what makes animated films successful.