Versatile teenage star Saoirse Ronan talks vampires, romance and having to turn down The Hobbit 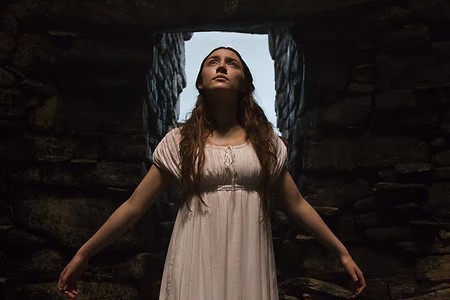 She is only 19, but the gifted young actress Saoirse Ronan is a veteran of film and television, having begun her career at the age of nine in the Irish TV medical drama The Clinic.

Her big break came when she was 12 in Atonement, earning an Oscar nomination. Saoirse’s (pronounced Seer-sher) latest film is vampire thriller Byzantium – out today.

She plays Eleanor, the daughter of a 200-year-old mother played by Gemma Arterton. 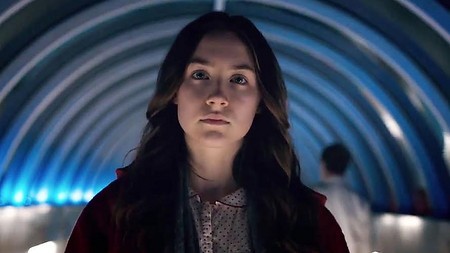 Isn’t Gemma Arterton a bit young to be playing your mother?

Yes, she’s only eight years older than me but she’s very much a woman and very maternal. At least, she was with me. And she’s such a terrific actress.

You’ve been dealing with creatures from other worlds lately. Do you think there are such things living around us?

I find it hard to believe there’s no one but us. There are still so many things that are lost out there that we don’t have a clue about. I’m sure there are many other beings that are different to us living somewhere else, with crazy eyes.

You’ve been in a few scary movies. What scares you the most in real life?

I’m not afraid of spiders but I had this dream once that I was sleeping in my house, in the spare bedroom for some reason, and I woke up and thought I saw this massive spider just looking at me and I really freaked out. I was really scared and I ran out of the room. It was just an illusion but it really scared me.

You’re always referred to as an Irish actress but weren’t you actually born in America?

Yes, I was born in New York, but my parents are Irish and we went back to Ireland when I was three. I was raised in County Carlow but I have dual citizenship.

Yes, I remember going on films sets with him when he was working on such films as The Devil’s Own and Veronica Guerin. We’re very close.

How do you enjoy the kissing scenes in your films?

They’re uncomfortable and awkward at first but you have to kind of get over it.

What is your favourite love story?

Romeo and Juliet is the classic love story. When two lovers are separated and trying to get back to one another, that’s fiercely romantic and something you become glued to.

Yes, to a certain extent, but I’m not soppy, if you know what I mean. But I do appreciate romance.

Who were the actors who influenced you most in your career?

I love a lot of comedy actors and actresses like Kristen Wiig and Tina Fey and all those women who are really brilliant and funny. And Meryl Streep.

There are a lot of people I’ve worked with who I really admire because I’m on the set with them every day and I see how they work and I know them as people.

You do a lot of running in your movies. Are you interested in sports?

I was a sprinter when I was young and I was quite fast. I loved doing the 100 metre sprints and getting it all out in something like 18 seconds or whatever. And somehow I always end up doing it in films and it’s really great. It keeps your energy up, especially when you’re doing fight choreography, and it gives you something to focus on.

‘Byzantium’ is released is distributed by Captive Cinema.  Showing on November 27, 2013.