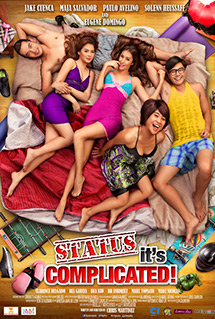 When people talk about director Ishamel Bernal, the conversation tends to be dominated with talk of Himala. But the hardcore Bernal fans will often bring up the comedy Salawahan as an even better example of what the director could do. Salawahan is a perhaps the wittiest film to ever come from our shores, with blindingly funny rapid fire dialogue exploring modern relationships. Status: It’s Complicated tries to recreate that magic, mostly by quoting the original film line for line. The translation can be clunky at times, but that dialogue really does hold up.

Chef Manny (Jake Cuenca) is an avowed playboy. His flatmate Jerry (Paolo Avelino) on the other hand, is still waiting for the right woman to fall in love with. After Manny's antics land him in trouble yet again, the two get into an argument about their respective lifestyles. Manny jokingly suggests that they should swap their approaches. As it happens, the two end up doing that anyway, as Manny falls for the mercurial Rina (Maja Salvador) and Jerry finds himself courting the carnal affections of two of his clients (Solenn Heussaff and Eugene Domingo).

This movie, much like director Chris Martinez’s previous remake, Temptation Island, doesn’t stray very far from the original. It mainly moves things to the present day, with characters possessing cell phones and doing yoga and working in graphic design. Some of the language is updated as well, but for the most part, the film quotes the original wholesale. It delivers the lines in much the same way as well, the characters trading witty barbs at machine gun speed, never giving the audience time to breathe. The lines, despite having been written all the way back in the 70s, hold up surprisingly well. It’s a testament to the achievement of Bernal and writer Jose Carreon, but credit must also go to this production for keeping up the pace.

But the faithfulness is a double-edged sword. The film could have taken the opportunity to flesh out some of these subplots. Salawahan leaves a few things hanging, and the film offers no solutions. Some of the more emotional parts still don’t ring true, the characters forced to make awkward bids for drama. On the other hand, a couple of the updates actually weaken the characters. Yoga, for example, isn’t really equivalent to ballet in the original. They are very different disciplines that suggest very different things about the personality of the character.

Game performances from all the primaries keep the energy up. The actors are certainly helped out by having such rich material to deliver, but they all do a pretty amazing job of bouncing it all off of each other. Jake Cuenca is developing into a formidable comedic talent. Paulo Avelino continues his growth as an onscreen performer, providing a very charming presence on screen. Solenn Heussaff’s accent is unavoidable, but she admirably keeps up with all of it. Maja Salvador seems really comfortable with the speed of the delivery. And of course, Eugene Domingo is simply incredible.

Like with Temptation Island, I think I do have to ask if Status: It’s Complicated really needed to exist. Again, it isn't much different from the original, the film having very little of its own to say. Perhaps the budget might have been better spent on restoring a print of Salawahan. But one should respect the craft that still went into this movie. A game cast gleefully delivers these amazing lines, and all of it continues to be funny. With Salawahan so difficult to get hold of these days, this movie provides a fairly welcome alternative.