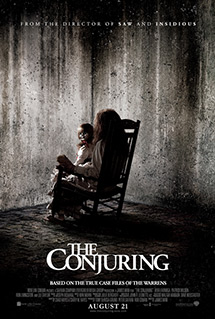 The Conjuring anchors itself deeply in the past. This is fairly evident in its period trappings, with all the hair and the clothes indicating a very different time. But its commitment to a pervious era isn’t simply external. The film eschews the pace and the gimmicks of recent horror movies, and steals all the best techniques from the grand history of the genre. The result can feel terribly familiar, and maybe a bit thin. But it’s also powerfully effective as a piece of horror cinema.

The Perron family has just moved into a new house. Almost immediately, weird things start happening to them. The mother Carolyn (Lili Taylor) wakes up with mysterious bruises on her body. They find their dog dead and mutilated. The daughters are noticing strange smells and things moving in the shadows. When things get out of hand, the Perron family turns to paranormal experts Ed and Lorraine Warren (Patrick Wilson and Vera Farmiga). The experts stay at their house, investigating the odd phenomena, and digging into the property’s wicked and violent history, hoping to save the Perron family from an untimely, supernatural end.

There is nothing in here that we haven’t seen before, right down to its basis in the supposedly real-life exploits of Ed and Lorraine Warren, who are perhaps best known for their involvement in the Amityville Horror case. But though the story is basically the kind of hokum that we’ve been seeing for years, the execution is anything but. The film mostly bucks the trend of empty jump scares, and draws from a wider pool of horror inspiration to generate its scares,

“Inspiration” a nice way to put it, actually. It could just as accurately be called “stealing.” This may sound accusatory, but it really isn’t. The genius of the film is it steals so well, capturing the very essence of the films they’re lifting these elements from, rather than just copying the aesthetic. The movie then plays out as a greatest hits of horror in the last century: creepy dolls, things coming out of the shadows, unsettling children, exorcisms, bird attacks, things appearing in the mirror…it’s all there. And it’s all expertly executed, the film focused not on the tricks, but the atmosphere that surrounds them. It sets up a tone where all these things are driven to their creepiest effect.

Director James Wan lets his obvious affection of the genre lead the way, and though the story reveals little that hasn't already been covered by these previous films, the experience is still a strong one. It helps a lot that the cast is made up of seasoned veterans. Acting has always been an overlooked aspect of this genre, but with the likes of Vera Farmiga and Lili Taylor in front of the camera, the film commits to delivering something beyond the usual screamfest. There's depth to these performances, a lingering emotion that fleshes out the visible fear in their eyes.

The Conjuring can be dismissed as thin and derivative, but this would ignore the immense technical skill that went into crafting the film's scares. It uses a variety of tools that have long been around, but it uses them in ways that really do justice to their power. Whereas many of the horror movies of the past decade or so have just been about startling the audience, The Conjuring seems to have genuinely set out to scare people, studying what it is exactly that makes these tools work, and unleashing them with great respect and relish.