Edward Norton is Ret. Col. Ric Byer in “The Bourne Legacy,” directed by the same Tony Gilroy who wrote the screenplays for the previous films, “The Bourne Identity,” “The Bourne Supremacy,” and “The Bourne Ultimatum,” all based on the universe created by the writer Robert Ludlum.

The actor does not like to call his character a villain, preferring to say that he is, with the agent Aaron Cross (Jeremy Renner) and scientist Dr. Marta Shearing (Rachel Weisz), a piece of the intricate and morally complicated puzzle involving the government, corporations and scientists. In Rio for the Rio +20 environment conference, he talked about the film, his interest in sustainable development, and the miniseries “Undaunted Courage,” based on the book by Stephen Ambrose that he is producing with Brad Pitt for television. 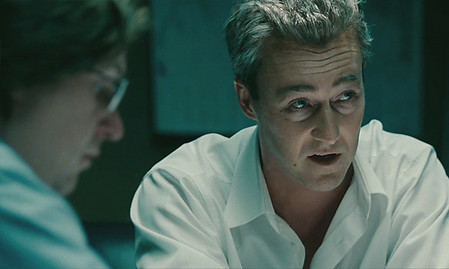 Q: Were you a fan of the previous BOURNE films?

A: Yes, I always thought they were very intelligent and sort of realistic.

Q: How different is THE BOURNE LEGACY in relation to the previous BOURNE films? Did you have to go back to them?

A: The great thing is that there’s consistency because Tony Gilroy wrote the other films and went on to direct this one. The BOURNE films appeal to the conspiracy theorist in all of us. What makes this one distinctive is the way that Tony (Writer/Director), instead of trying to start over, just widens it out and makes you realize that the first films were like petals of the flower. Now the flower is opening up and you are starting to see the whole world that this was a part of. Tony is expanding the story, instead of trying to start over. He’s now widening out from government and starting to include corporations in the web of the corruption and conspiracy. It’s a very interesting way to go.

Q: You’ve said in interviews that you generally like films that reflect the zeitgeist and talk about what’s going on in the world. Does THE BOURNE LEGACY fit into this thought?

Q: So, THE BOURNE LEGACY is not merely an action film?

A: No, it’s not just an action film. Tony is really good at lacing some ideas, or shades of gray, into THE BOURNE LEGACY.

Q: Was that important for you to do this? Does an action film have to do that for you to be interested?

A: Different films provide different combinations of entertainment and thought-provoking qualities. There are some straightforward action films that are great. The main thing that drew me into this project was that I really like Tony’s films. I think he’s had a very consistent set of themes that I have always been really interested in. It’s fun to work with someone who’s got a special intelligence about a certain subculture and world. I would say that Tony was the main draw for me because I like his films and liked the idea of working with him.

Q: The film also tackles the subject of scientific experiments not always going well. Can you expand on this?

A: Yes, I think this is one of those subjects that Tony said, “Don’t talk about it!” (laughs). This film is very much about the collaborations that exist between the government, corporations and science. It’s how these things have become interlaced with each other and sometimes how they end up creating a moral gray zone.

Q: In THE BOURNE LEGACY, you are the villain in this movie. Correct?

A: I would say that Aaron Cross (Jeremy Renner), Marta (Rachel Weisz) and Byer, my character, have all made choices and decisions that have a lot of compromise in them.

Q: For a film like THE BOURNE LEGACY, is there preparation?

A: Tony’s screenplay was very strong. I read up on the nature of these agencies within government just to understand the differences between the departments of government that handle these kinds of things. It wasn’t something that required a deep amount of research other than to get familiar with the language. Because THE BOURNE LEGACY is so intelligently written, if you can absorb that and make it feel credible, Tony’s done the work to make sure it sounds real.

Q: As a director, what does Tony Gilroy bring to the film?

A: Tony is incredibly organized. Some directors are very improvisational, but Tony is like a diamond cutter. He’s very precise and specific, which is great. He’s very articulate and very clear in communicating how he sees things and what he wants. It makes it very, very easy. I really admire the way he works. He doesn’t miss anything and he’s so well prepared that it makes it very relaxed on set.

Q: You’ve been away from the movies for a while. Were you taking time to pursue other interests like environmental issues and theater?

A: I was building a theater in New York but I made two films last year. I don’t usually make more than two films a year. I was also writing and my company is producing some films. I spent most of one year writing a miniseries for HBO (Undaunted Courage) and a film script.

Q: Is the process for a television mini-series similar to that of a film?

A: It has been a long development process with this series. We don’t know when we are going to film it. I always do a lot of things at the same time because you never know which one is going to happen right away.

Q: Being so involved in so many different things, do you ever take time off?

A: I am involved in a lot of things. I have other companies and other pursuits. It all overlaps but I usually find a way to balance it all.