We Bought a Zoo

In Cameron Crowe’s inspiring new film, We Bought A Zoo, Scarlett Johansson plays Kelly Foster, a plucky and hard working young woman who is dedicated to her job as a zoo keeper and passionate about the animals in her care. 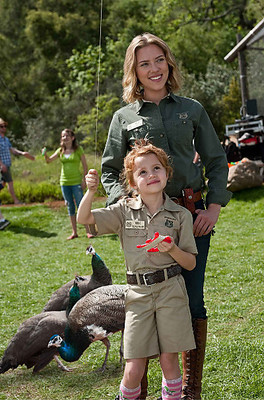 Benjamin Mee (Matt Damon) buys the zoo, Rosemoor Animal Park, in order to give his family a fresh start in life. His wife Katherine has recently died and he is looking for a new direction for himself and his two young children. Running and restoring a dilapidated zoo is ostensibly an odd choice and Mee definitely takes on more than he bargained for. With the help of an eclectic staff and with an assortment of adventures along the way, the family works to return the run down zoo to its former glory and to heal their own pain.

Q: What type of woman is Kelly in this movie?

A: “Kelly is incredibly driven and focused. She has dedicated her entire life to her job and she actually says in the film, ‘I don't have a life, this is my whole life. I come here from morning to night and my friends are out enjoying themselves with different guys and going to bars. I don't do any of that stuff.’

Q: What was the appeal and challenge of this character for you?

A: “What I love about Kelly is that she’s so totally matter of fact. There’s nothing about her that’s vindictive. She doesn’t really want anything from anybody except for an honest day’s work and I appreciate that sentiment. I have never had the opportunity to really play a girl who’s very pure and straightforward in her thinking.”

Q: Did you have anything in common with Kelly and what did you bring to her?

A: “Well I’ve always been someone who’s been a bit of a caretaker for my family and friends. I guess for me it was about infusing the character with a softness. There can be a tough edge to that type of female. Often women who are running a business are portrayed in films as tough broads and she’s not like that.” 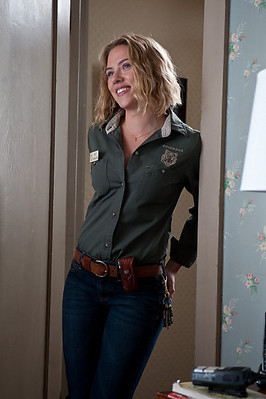 Q: What was it like working with Matt Damon?

A: “I've always wanted to work with Matt. He is an incredible dramatic actor; there's something very ‘Golden Age of Hollywood’ about him. He's got a Cary Grant quality about him. He is also hysterically funny. We laughed so much on the film, we could barely get through our takes. There’s nothing about Matt that is at all movie star-esque but he really is a true movie star. He is warm and welcoming.”

Q: Were there any scary moments for you with any of the animals?

A: “Well you don’t go onto a film set knowing that you're going to place 70 snakes in a bucket thinking ‘this is a normal job’ (laughs). We all had to get in there and recapture an escaping shipment of exotic snakes: including pythons and anaconda and other non-venomous snakes. But I was fine because I had reptiles as a child. Now I do have dogs at home – a Chihuahua and a kind of Golden Retriever.

Q: What is the film really all about do you think?

A: “I think the story is about challenging yourself and coming out on top through hard work and perseverance. It shows that anything is possible. I know that sounds like a bit of a trite message, but I think there is a lot of truth in it.

Q: Although there is bereavement, the film is very positive isn’t it?

A: “I think this film is about human connections. We don't just have one big adventure in life; life is an adventure in itself, with all of its grief and surprise and romance and possibility. I've certainly experienced loss and most people that I know have experienced some form of loss. It causes you to be introspective and to grow. You grow from loss.”

With more than a decade of work under her belt, four-time Golden Globe nominee and BAFTA winner Scarlett Johansson is one of Hollywood’s most talented young actresses. Born and raised in New York, Johansson won worldwide recognition at the age of 12 for her performance in Robert Redford’s “The Horse Whisperer.” She also starred in films She received rave reviews and a ‘Best Actress’ Award at the Venice Film Festival for her starring role in “Lost In Translation.” Her film credits also include “Ghost World,” “The Man Who Wasn’t There,” “Vicky Cristina Barcelona,” “The Other Boleyn Girl,” “In Good Company,” “A Love Song For Bobby Long,” “Match Point,” “The Spirit,” “Girl With A Pearl Earring,” “The Island,” “The Black Dahlia,” “The Prestige” and “Iron Man 2.”

“We Bought A Zoo” opens January 18 in theaters from 20th Century Fox to be distributed by Warner Bros.

We Bought a Zoo