Emerging new actress Greta Gerwig plays Naomi, a New York City tour guide who shares Arthur’s (Russell Brand) idealism and spontaneity, in Warner Bros.’ new romantic comedy Arthur. The independent Naomi sees the billionaire bachelor not only for who he is, but for who he could be, and finally gives him a reason to take charge of his own life. 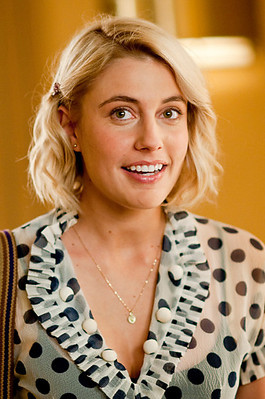 For Rusell Brand, “a shared sense of humor fuels any good relationship, and that’s what draws Arthur to Naomi”—inconveniently enough, just hours after he’s promised his mother to marry Susan Johnson (Jennifer Garner), under threat of disinheritance. “Arthur likes Naomi because she has the kind of wit and imagination that he does. She’s someone he can laugh with, have fun with, and share his thoughts.” 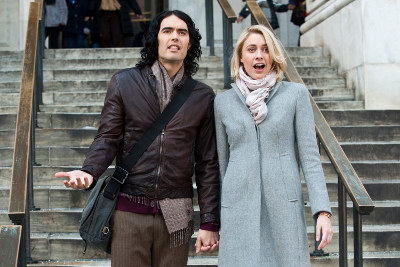 If Arthur sees quality in Naomi, it’s likely because he’s learned a thing or two about quality from his nanny and best friend Hobson (Helen Mirren). “Like Hobson, Naomi is quick-witted and won’t take any bull from him,” observes Gerwig.

Naomi challenges him, at the same time embracing his open-hearted, playful side. In that respect, she’s a perfect example of how to combine the best of Arthur with a practical grounding that makes it possible to thrive in the real world.

“The wonderful thing about Naomi is that she doesn’t want to be anywhere other than where she is. When she discovers Arthur is a billionaire, she thinks that’s fine for him, but she’s not covetous and doesn’t see it as an opportunity to improve her life. She thinks her life is pretty good already. Her affection can’t be bought,” says Gerwig.

“Likewise, her forgiveness can’t be bought when Arthur inadvertently hurts her,” she continues. “This is a new concept for him and it makes him think. Naomi ends up being the catalyst for his transformation, because she won’t take anything less.”

The filmmakers cast Gerwig in this pivotal role initially on the strength of her performance in the dark comedy “Greenberg,” but also because of the sparks that flew during her audition with Brand. Says director Jason Winer, “She was so arresting and spontaneous in ‘Greenberg.’ But what clinched it was what a great improviser she was and how she sparred so freely with Russell. She was fearless.”

She would have to be. “Improv’ing with Russell is like playing speed chess,” the actress attests. “It’s exhilarating. He’s always thinking 12 moves ahead.”

Opening across the Philippines on Black Saturday, April 23, “Arthur” is distributed by Warner Bros. Pictures, a Warner Bros. Entertainment Company.