Potato Corner, the first and the original flavored French Fries opened its first outlet at the SM Megamall in October of 1992. This year, 2008, marks Potato Corner's 16 year. This concept was the brainchild of Jorge and Jenny Wieneke and Danny and Marivic Bermejo who also, before opening the first outlet, invited Ricky and Lisl Montelibano and Jose "jo mag" and Inez Magsaysay to join the group as the founding members. After the four couples got together they formed a corporation that operated Potato Corner. In 2001, the company then took in a 5th Partner who was instrumental in the development of the Vis/Min operations, Jojo Montinola. There being 5 Partners, they then changed the corporate name to Cinco Corporation.

In 2003 Potato Corner was the recipient of the Franchise Excellence Hall of Fame Award. This Hall of Fame award was given by the Philippine Franchise Association and the Department of Trade and Industry for the distinction of winning Best Franchise of the year for 3 straight consecutive years.

Today, Potato Corner is stronger than ever, it now has 200 outlets nationwide of which 70% are franchise operated. Potato Corner has ventured internationally with 10 outlets now in Jakarta, Indonesia which is operated by their Partner, Artini. Cinco Corporation has also started professionalizing its Board of Directors by bringing "Guru's" Andy Ferreria and Danny Antonio. This years Board of Director's are; Jojo Montinola (Chairman of the Board), Ricky Montelibano (President) , Marivic Bermejo (Treasurer), Atty. Banz Banzon (Corporate Secretary), Inez Magsaysay, Danielle Christine Bermejo, Andy Ferreria and Danny Antonio.
Restaurants Nearby Shops Nearby 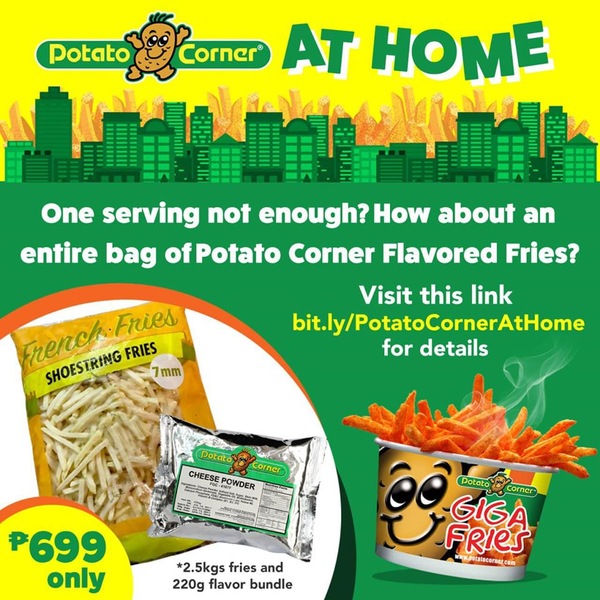