Time keeps ticking with Taco Bell! Taco Bell goes global, now in the Philippines ! Taco Bell Philippines is owned and operated solely by Philippine Pizza, Incorporated. Having opened its first restaurant at the Ground Floor of the Gateway Mall along Roxas St., beside Araneta Coliseum in October 18, 2004, Taco Bell has never looked back ever since. In less than an year, Taco Bell opened 2 more branches in the 3 rd Level of Gateway Mall and in the Ground Floor of SM South Mall. With another one soon to be opened along E. Rodriguez in Quezon City, Taco Bell is all set to offer more and more customers their great menu and service that will keep them coming back for more. 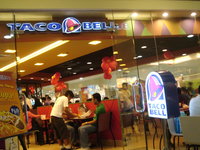