Operating Hours
Monday to Friday: 11:00am to 10:00pm
The Authentic Japanese Restaurant & Sushi Bar
Saisaki for the Japanese means a good beginning. This is celebrated with food and merriment in honor of Ukemuchino-kami, the food goddess. Indeed, here the tradition of Japanese culinary excellence lives on.

In 1985, during a time when all Japanese restaurants were of dark, muggy interiors, Saisaki broke through with a bright, spacious dining place, but still Japanese in ambience. A special odor exhaust system was introduced to avoid the smoke and clinging cooking smell. Japanese Master Chefs were flown in to ensure the quality of the food. Saisaki made Japanese cuisine more popular among the Filipinos.

Through the years, Saisaki has become the standard by which excellence in Japanese cuisine is measured, evolving with the changing preferences of the dining public. When the eat-all-you-can buffet concept became popular in the 1990s, Saisaki featured only authentic Japanese dishes, an incomparable spread of over 100 Japanese specialties made more appetizing and exciting with the interactive on-the-spot cooking, where diners can watch the actual cooking and dishes can be customized to their preferences.

Saisaki offers the widest range of ingredients in the most popular Japanese cooking styles: nimono, tempura, nebemono, agemono, teppanyaki, yakimono, sushi, sashimi, makimono, and temaki. Saisaki with its buffet festivals, has introduced diners not only to the yearlong festivities in Japan, but also to the unique delights of Japanese cooking.
Restaurants Nearby Shops Nearby 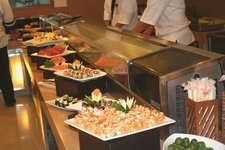