I am a big fan of buffets, as I can stretch out my appetite to go a long way. What can I say, I really like to eat. The beauty of a buffet set-up is that you’re most likely to enjoy your meal, since you get to choose whatever you like, and go back for more. And a little more, or much, much more.

A couple of recent buffet experiences here in the metro proves to myself (so far), that it is the ultimate buffet in the metro. Its scope is wide and grandiose, it encompasses two levels of a prestigious hotel in Makati. I have wined and dined there twice, and both times I have headed home completely satisfied, with that groggy after-effect of a huge pig-out. Folks, I have discovered an amazing race of gastronomic proportions at Dusit Thani Manila.

Dusit Thani Manila, recipient of Best City Hotel Award at the 2008 TTG Annual Travel Awards, introduced this unique and captivating dining concept mid-2008. The Family Sunday Brunch, more popularly known as the Crossover Buffet, gives you a culinary adventure with its different cuisines and venues. Four out of Dusit’s seven outlets participate in their Crossover Buffet which happens regularly on Sundays, from 11:30 in the morning until 3:00 in the afternoon. What does this mean? It means you get to restaurant hop and eat all you can, drink all you can in all four restaurants!

The lobby level houses two of the restaurants, namely, Umu (a crowd favorite) and Basix. At the Mezzanine (one level up) is where you can find Tosca and Benjarong. If you’re all geared up for the Crossover experience, it’s best to wear comfy shoes (ladies, ditch those stilettos!) and clothing as restaurant hopping means doing some walking. Also, it may be best to eat a light breakfast (or none at all) before heading to Dusit for the buffet, if you really want to maximize your experience. First-timers at the Dusit restaurants can also try the buffet as a teaser to what each establishment has to offer, to decide which among the four restaurants win you over.

A Symphony Of Style And Savor At Umu
Dusit Thani Hotel’s Japanese restaurant was a beautiful backdrop for an intimate family gathering.

The classy atmosphere is impressive, and if you are seated near the windows, the view of their Japanese garden is delightful — it gives you an impression that you’ve been whisked away and brought to the heart of Japan. It’s no wonder Umu made it to the Final Four – Best Design award for Best Restaurant category in the Hotel World Global Hospitality Design Awards held in Las Vegas.

I kept things light first and just got a little sampling of each, because I knew I had three more restaurants to go. My father was content with his Japanese grub, so he happily finishes his plate and got more rounds, as my brother and I stood up to attack our next venue.

Just a short walk away from Umu is Basix, Dusit’s all-day dining restaurant offering international fare and live cooking stations. My brother went crazy with the meat carvings and assorted sausages, while I was a bit overwhelmed with the selection, that I took several minutes to look around first and double check what I wanted to sample. The spread was varied and aplenty – cheeses, breads, meats; salad and cold cuts, halo-halo and crepe station, hummus and other dips and sauces, seafood.

“>
My plate of cold cuts

After filling up my plate, we head back to Umu to see my father with his second round of Japanese food. I think he completely forgot about the ‘crossover’ in the buffet, but he seemed very happy with what he was having anyway. I also realized that it was quite brilliant to have people resto-hop for their buffet because the in-between time of walking, standing, and walking back does burn some calories and gives the much needed time for digestion.

Past 1pm and it was time to level up our lunch. We opted to take the stairs to Benjarong to see what’s in store for us. The Authentic Royal Thai restaurant had its buffet spread outside, making it more convenient for us since Tosca is right beside it.

The Italian restaurant Tosca has a cosmopolitan vibe and has the perfect atmosphere for dinner-dates and intimate gatherings. I also have been told that it is the 2-time recipient of Wine Spectator Magazine’s Award of Excellence. The New York based magazine remains to be the leading authority on the world’s finest wines, best dining and travel destinations.

I took a mental note to come back to Tosca as we headed downstairs back to Umu, as their dessert spread was being crowded over by other buffet guests.

Now, it’s time for dessert. In my world, there is always room for dessert, even after consuming four plates of food coming from four different restaurants. A crepe and ice cream scoops from Basix, cheesecake and molten chocolate cake a la mode from Tosca all sealed the deal of my Crossover Buffet experience. It was grand, it was fantastic, it was a total pig-out experience.

From my two brunches, I have developed some favorites – Umu and Tosca. Hoard their sushi and sashimi because they are really amazing, and grab some tempura and gindara while you’re at it. Tosca will fill you with some good sparkling wine, delicious oysters and cold cuts (their salmon is excellent). Their molten chocolate is the best! Top it with ice cream for a real treat. Don’t forget the pad thai and tom yum of Benjarong, and the meat carvings, crepe station and assorted breads and spreads of Basix.

At the end of the feast, I can say that my appetite was totally satisfied. And I can tell from that familiar sleepy-dazed look on my brother’s face, and by the way my father was patting his stomach and sighing, that my company felt likewise. 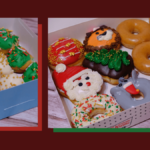 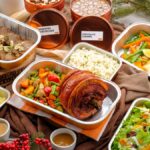 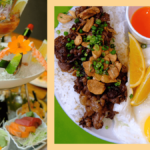 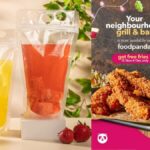 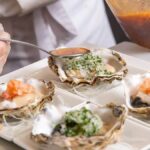 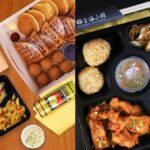