God answers prayers -- even the smaller ones, like requesting for a nearer branch of a restaurant.

I have finally eaten Crispy Dinuguan! 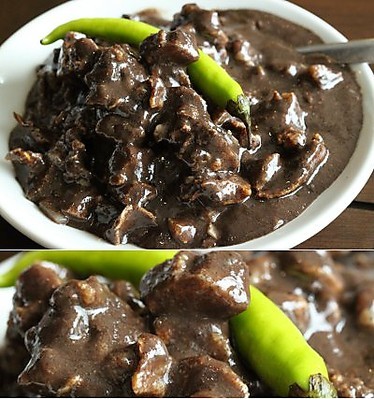 Okay, most of you would probably reply “So?” Others might even brag and add, “Just now?! I eat there every week!”

I know, I know. Kanin Club, the home of the famous, cult favorite Crispy Dinuguan, has been in existence for several years now. It has also been featured countless times and has received numerous recognitions – official (being part of the ritzy Miele guide) or not (The Best Dinuguan Ever In My Friend’s Opinion Award).

Then why just now?

Begrudgingly, I live all the way up north and not even the worst case of craving can justify the 3 hours it will take me to reach KC’s branches in Paseo de Sta. Rosa and Westgate Alabang. But thankfully, God answers prayers — even the petty ones requesting for a nearer branch. Kanin Club finally opened another branch. And oh yes, it’s in Quezon City! 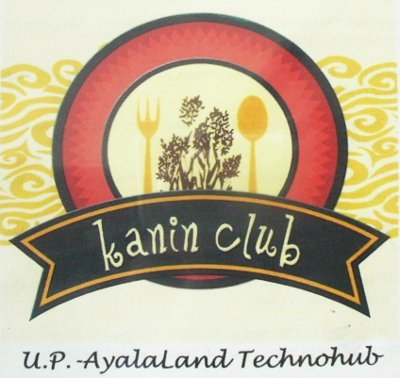 I made it a point to visit the branch as soon as they have settled comfortably. A little more than a month after opening, I scheduled my first date with Crispy Dinuguan.

Just like any other first dates, I prepared. I ate very little during breakfast, intentionally avoided wearing light-colored clothes (No room for messing up!). I read its profile and previous reviews (not one was negative!) and imagined myself subjecting to “Bloody goodness!”, as Trina Epilepsia remarked.

Bea, who was with Trina the first time the Paseo de Sta. Rosa branch was featured in this site, tagged along with me. What can I say? The girl loves her dinuguan. Together, we went out of our way to visit the newest branch at the UP Ayala Technohub in Commonwealth. It’s still far-flung from my place, but heck, I’d choose Commonwealth over Laguna anytime. 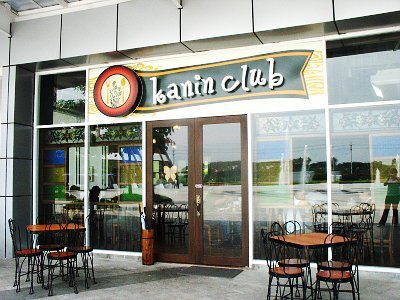 We arrived in time for lunch, which would have been problematic if we did not place a reservation. Barely several months old, the place was almost packed! My already high expectations from the resto went several notches up upon seeing big groups of patrons come and go on a regular weekday. The complex is surrounded by offices, so competing with the corporate lunch and dinner crowd should be considered. “It has been only a month and people are already lining up for tables, I guess that means something,” Emely Mendoza, one of Kanin Club’s owners shared. 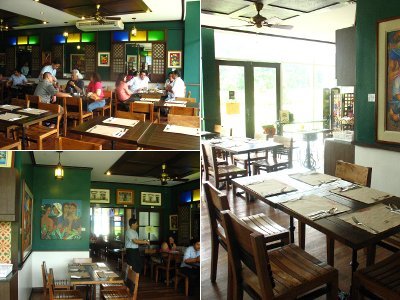 Photo Taken After One Hectic Lunchtime

If I were the one in charge, I would have ordered and dug into a bowlful of Crispy Dinuguan (P233) and All You Kanin (P60) right away. But of course, I had to sample several of their best sellers first, and constantly remind myself not to overeat no matter how much I like a dish. My main purpose, after all, is yet to be had at the end of the meal.

First to arrive was the Crispy Beef Salad (P246)… 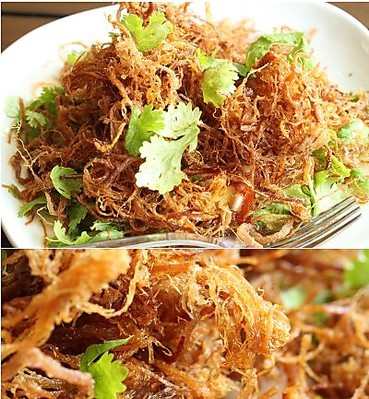 Which, after some chewing and thought, shouldn’t be called salad at all. See that brown floss? That’s beef. Crispy, stringy, vinaigrette drenched beef. Its flavor would put even the chunkiest meat to shame. And just because it’s called salad doesn’t mean you should deem it as light. According to the menu, “the chef woke up one morning with the idea of a meat lover’s salad.” And Chef Anthony created it, perfectly!

After our salad fix, we were recommended to taste Sinigang na Salmon Belly sa Miso (P373), which, according to co-owner Mariel Luna, is slowly becoming a favorite among the soup based dishes. 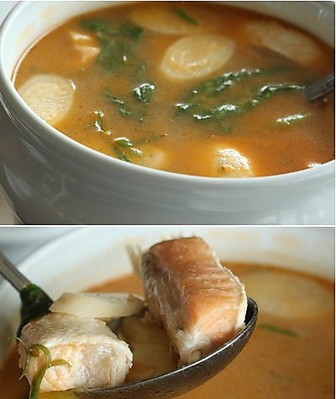 Of all the variants of sinigang, I’m always partial to the guava-based and miso-based variations. That being said, the Salmon Belly Sinigang did not disappoint. Its use of salmon might put you under the impression that this is just an upscale version of what we normally eat (the Maya-maya). But interestingly, the already salty characteristic of salmon blends well with the just-perfect sourness of the soup. Chef Anthony Mendoza has indeed mastered the “just right, no more no less” combination of salty and tangy, which we Filipinos love.

And speaking of what Filipinos love, there’s another interesting take on this favorite comfort food in Kanin Club.

If there’s to be a second runner up in the KC dishes that are most-recommended by patrons, it would be the Sinangag na Sinigang (P224). 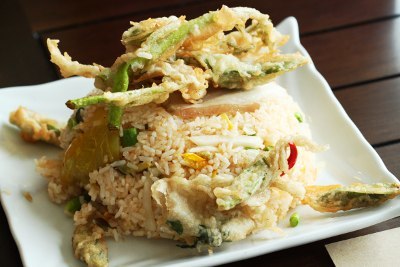 I remember raising my brow when Bea related how amazing the Sinangag na Sinigang is. It’s not only tongue-twister worthy. It’s mind boggling as well. I have never seen, nor imagined, a dry sinigang. How could you call something sinigang without the soup?

All the questions I had were answered when a heap of sinangag rice platter was brought out of the kitchen and placed directly in front of me. “There, Sinangag na Sinigang. Taste it,” Emely proudly said.

Upon smelling the familiar scent wafting off the dish, “Sinigang nga!” I agreed. My surprise even intensified as I took a spoonful. The breaded sitaw, the pork fat, the chili, the flavor and all the other elements that makes sinigang a sinigang were present. You wouldn’t even miss drinking its soup. This dish, which I think needs nothing else to pair it with, is miraculous.

The Itsi Bitsi (P224) came in as yet another surprise considering I’m not too fond of the veggies. 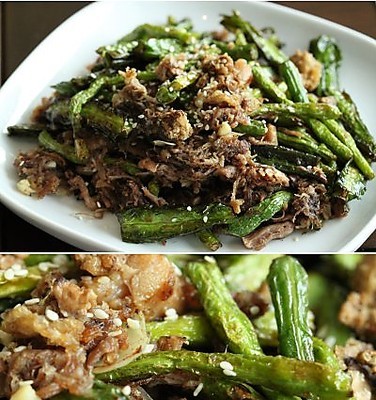 Sweet and salty this time, the Itsi Bitsi provided my tongue’s needed break from consecutive sour dishes. Pick this as your veggie siding and it is guaranteed to make your “umay” feeling disappear.

Four plates down, I was proud of my will to resist pigging out on the previous dishes despite my strong liking. One more to go and I’d have the sweet finale of that lunch. Problem is, that “one more” was so good, I had a harder time controlling my appetite. 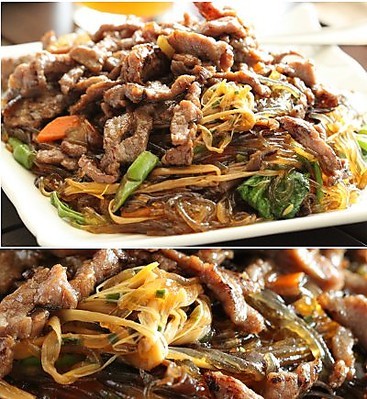 Pictured above is the Chap-noy. You may tease me all you can on how late it took me to visit Kanin Club and have my first bite of the Crispy Dinuguan, but you can never take from me the honor of being one of the first ones to taste (and approve) Chef Anthony’s take on the traditional Korean Chap Chae.

The dish is just bountiful, flavor-wise and ingredients-wise. They asked me if this veggie-laden and sweet sauce covered glass noodles should be served to the public. How could I say no?

I was still enjoying the slippery, saucy noodles, when I finally saw it arrive. In stark contrast against the white plate that holds it, there it was. My Crispy Dinuguan.

Up until I took my first bite, I still had no idea how something covered in sauce just like a regular dinuguan can be crispy. How can something as household as dinuguan be that be special? How can this simple looking dish generate a multitude of fans?

After that one bite — a hesitant and careful bite — all my questions were answered.

The chicharon-like crunch of the meat. The tartness of the sauce. The contrast and harmony of the flavors. 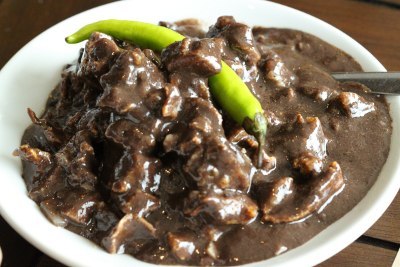 If you belong to the group that have had the chance to taste the magic of the Crispy Dinuguan, now is the time to welcome me to the club.

If you still haven’t had your first date with the Crispy Dinuguan, pray. Pray harder. Who knows, the club might just set up a branch near you. 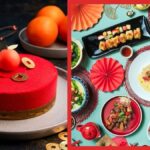 Chinese New Year 2022: Welcome the Year of the Water Tiger with These Hotel Dining Deals! 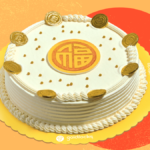 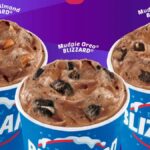 Dairy Queen Welcomes the Year with a Delightful Mudpie Fest 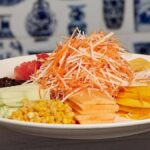 Ring In The Year of the Water Tiger at EDSA Shangri-La, Manila 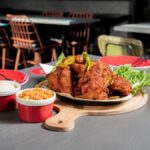 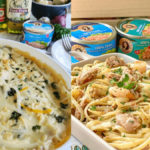