As part of their celebrity chef series, AirAsia is set to highlight Chef Hong Thaimee's INSPI(RED) Burger which is her way of highlighting her Thai roots and fusing it with the flavors of the west, as well as raising funds and awareness for HIV/AIDS.

If you've always traveled places, local or international, you would know that in-flight meals can either be a hit or a miss. Low-cost carriers, for one, only offer meals on an optional basis, so you never really get to try the dishes you can only see on the menu booklets found at the back pockets of the plane seats.

AirAsia, however, aims to change the game with their Santan Menu, which offers an extensive variety of meals which pay tribute to the best of ASEAN dishes. The menu is named after Santan – milk extracted from grated coconut pulp – which is a staple ingredient in numerous ASEAN dishes.

With their Celebrity Chef Series, AirAsia also invites prominent chefs from all over Asia to create a special dish that would bring the spotlight to the flavors of their home country. As part of that, chef, activist, and Thai food ambassador Hong Thaimee has introduced the INSPI(RED) Burger, a dish which would not only be a good munch during the flight but also something which raises awareness and support for people with HIV/AIDS.

A Thai chef based in New York, Chef Hong created a burger that infuses the flavors of her hometown, Chiang Mai, Thailand, into the all-American burger. The result is a chicken patty infused with fish sauce, kaffir lime, and lemongrass, which is then topped with purple cabbage, tomato, and nam prik noom mayo (green chili mayonnaise that's said to be a recipe from Chef Hong's grandma). The fillings are then put in a red beetroot bun, living up to its name of being AirAsia's INSPI(RED) Burger.

By creating the INSPI(RED) Burger, Chef Hong hopes that she gets to contribute to the fight against HIV/AIDS, as well as raise awareness and support for those who live with it. That is why for every burger sold, 10% of the sales will be going to the Global Fund supporting HIV/AIDS testing, counseling, treatment, and prevention programs in the ASEAN region.

Aside from the INSPI(RED) Burger, there's also still a good number of dishes to try and check out from AirAsia's Santan Menu, especially if you prefer rice meals over burgers. All these hotmeals are priced at P140, and comes with bottled water of coffee, if you book them on the website before the flight. Here are some of the other dishes which you can pre-book and/or order from the menu:

Another Filipino classic is the Adobo Espesyal, which is the airline's take on the home-cooked dish. It's basically chicken cooked in a blend of soy sauce, vinegar, and different spices, served with annato rice and banana slices.

For the kids and the adults alike, they can order the Salisbury Steak, which has a good serving of beef patty served with mushroom gravy and over white rice. However, if you want to have Japanese food on your flight, definitely go for the Onigirazu and Sushi Bento, which comes with different kinds of sushi – from California crab sushi roll to BBQ salmon onigirazu.

For those with a sweet tooth, definitely try their Cinnamon Roll (P110), which is just the right amount of sweet and cheesy. Order this with a warm cup of coffee as these go perfectly well together! Their Ube Cheesecake (P110) is also a must-order if you want to have a taste of AirAsia's Filipino version of the classic dessert.

You can pre-book AirAsia's Hot Meals for only P140 via the AirAsia website. This comes with you hot meal of choice and bottled water (or a cup of coffee for flights longer than 90 minutes). You can also max your meal with a Chicken Macaroni Salad and Chocolate Brownie by adding only P60. 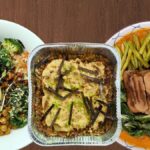 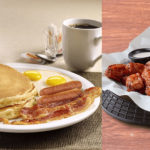 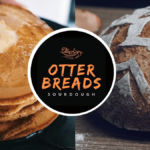 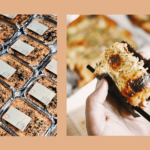 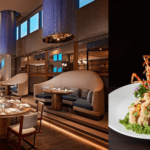 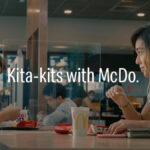