Afraid of ordering dishes too hot for your liking? Check out Kogi Bulgogi for authentic Korean food that's Filipino palate-friendly.

Of all the available cuisines in the metro, Korean is probably the least explored by my palate. Even with the abundance of Korean restaurants in the country, I never really found myself– a relatively adventurous eater– walking-in those well-lit establishments with neat scribbling of circles and lines in their neon signages. I know (and dislike) kimchi, instant Jjamppong (is a rainy day “instant” favorite), and beef stew. That pretty much sums up everything I know about the cuisine.

So when Katherine Paredes invited me over for lunch at Eastwood City’s only Korean restaurant, Kogi Bulgogi, for what she said is “Korean food, that’s Filipino palate-friendly,” I immediately agreed. What then followed was an immersion to the basics of Korean cuisine that had successfully left me wanting for more. 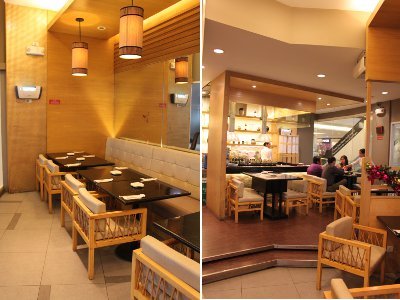 Lesson number one was that “kogi” meant “meat” in Korea. I always thought that “kalbi” was the word for that. Kalbi, according to Katherine, meant short ribs and kogi is a more general term. The bulgogi part of the name, I got right. “Grilled beef strips in sweet salty sauce?,” I asked. “Correct,” beamed my “teacher” Katherine. We enjoyed a couple of minutes more of translating the unfamiliar terms in the menu. The basic Korean lessons entertained me before the complimentary appetizers she mentioned earlier arrived. 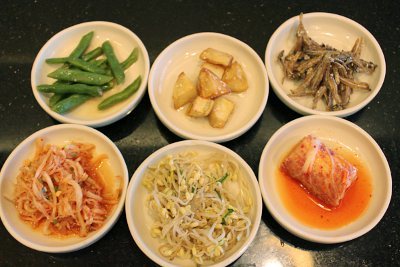 “All of these are complimentary? These are a lot!” the novice in the table remarked. Apparently, it is customary for most Korean restaurants to have these much set appetizers. On the table were tiny portions of Kimchi, radish, beans, sweet potato, bean sprouts, and spicy fish in sauce plates. 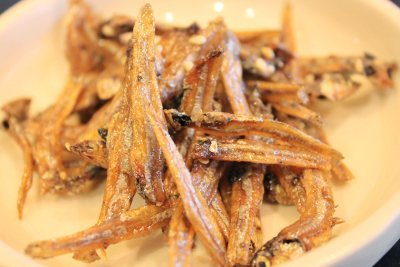 I loved how spicy the fish was. It bordered on hot to intense. Every piece made me pop a bean, which essentially tasted fresh like a crunchy nearly-cooked sitaw. If it were just me, the Kimchi would lay there untouched until the end of the meal. But I just couldn’t say no to the nudging of my host. I’m in a Korean restaurant after all. Not to eat Kimchi, didn’t seem like good move. After minutes of hesitation, I agreed and in my mouth went the pungent veggie. 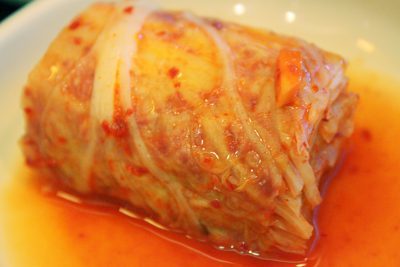 “Well, that wans’t as bad as I expected,” was my first reaction. Katherine gave me that I-told-you-so look. Nevertheless, I still don’t think this would be part of the things I’d crave for any time soon. Maybe after a dozen more kimchi eating sessions? I popped in my mouth a couple of sweet potato slices to wash off the lingering pickled taste.

But the strong kimchi was stubborn. It was, as if, making an effort to make me not forget its flavor. Good thing the still-bubbling Kalbi Tang (P239) landed the table soon after. Inhale. Exhale. Aaaah… the unparalleled, salivating aroma of steaming beef stew. 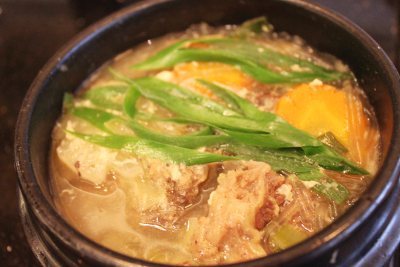 If I were to translate Kalbi Tang in Filipino, “bulalo” would be my choice of word. Although comprised of different beef parts (Kalbi Tang: short ribs; Bulalo: shanks with marrow), the hot soup essentially gives the same comforting feeling to whoever eats it. The Kalbi Tang is as hearty, even without the extra flavor by the literally “sinful” marrow. Like bulalo, it is also peppery– tickling your taste buds every now and then.

Though written in a foreign language, Kalbi Tang will surely be approved of any Filipino who loves hearty stews.

Next to arrive in our table was the Japchae (P208), which in turn gave me lesson number three: Not all Korean food are spicy. 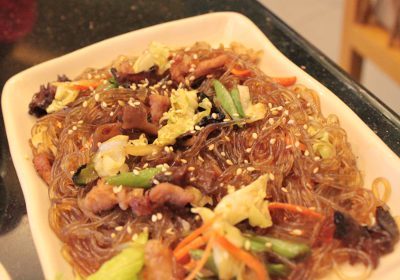 Japchae is stir-fried vermicelli with pork and mixed vegetables. I know I’ve tasted a dish like this elsewhere but they spelled it as “chapchae.” Spelling differences, according to Katherine, are normal since they are spelled in our letters by ear. That issue aside, I found the Japchae very much like the chapchae I tried long time ago. It is sweet-salty and is very unlikely to be dissed by Filipinos fond of pancit canton (not the instant one). Japchae’s noodles like the local sotanghon are translucent. Only, they are slightly thicker. I would have appreciated it better if the noodles were more slithery, but that’s just me. Flavor-wise, this is a safe order to try for those unfamiliar with Korean dishes.

Third dish (and lesson number four) came in a form very familiar, though something I didn’t expect to see in a Korean joint. Sushi! But in Kogi Bulgogi, it’s called a kimbap, and they apparently, they serve it “nude.”

Lesson four: The Japanese had a long and strong foot hold in Korea during the war era. If I paid more attention to my high school history class, I won’t be that surprised how close the cuisines of Japan and Korea are. The Nude Kimbap (P148) is about the length of your average Christmas morcon, sliced into 8 pieces. Each piece of the rolled and stuffed rice is twice, even thrice the size of a regular Japanese sushi. Silly me tried stuffing an entire piece in my mouth. After almost inducing my gag reflex, rest assured I never did it again. 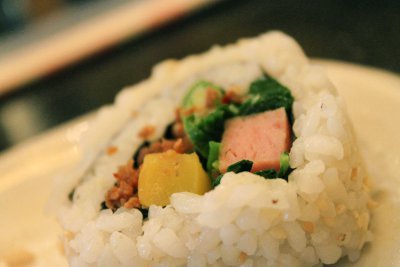 Soon as I figured how to eat it without choking myself, I started enjoying it immensely. This, for me is even better than sushi– I’m really not fond of the too variated flavors, temperatures and textures of the popular Japanese fare. Eating the kimbap, with vegetables, ground beef, and a cube that tasted very much like luncheon meat– neatly tucked inside a steamed white rice, was very much like eating a regular Pinoy ulam in a more exciting manner.

Last to be served was the Bulgogi (P260). In this case, the best was saved for last. 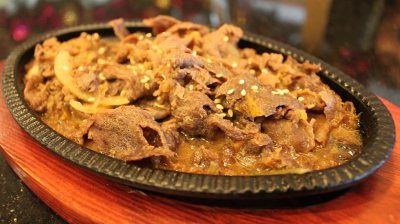 I had high expectations from this dish because: 1. the resto is named after it and 2. this is my most favorite Korean dish. Luckily, Kogi Bulgogi’s Bulgogi did everything but disappoint.

Not only did it look like its picture in the menu, it was as good as described. Served sizzling and simmering in beef broth, the Bulgogi strips are sliced thinly as needed. The Bulgogi gets points for being very tender; there’s zero struggle in ripping the strips apart. That, plus a sweet- salty sauce difficult not to like? You’d get one dish that’s not to miss when in Kogi. 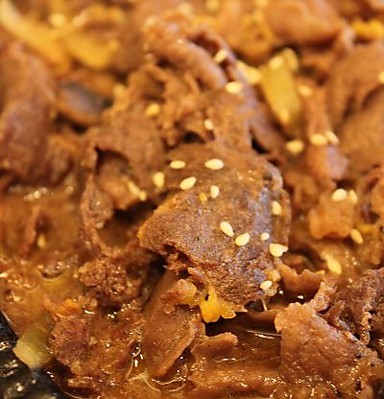 At the end of the lunch, I found myself stuffed and thoroughly pleased. Proud even, that I learned so much of the cuisine I usually veer away from. I encourage those like me, who are afraid of ordering dishes too hot or too foreign for your liking, to dip your toes in the water by heading to Kogi Bulgogi. My Korean 101 in Kogi Bulgogi definitely went better than I expected; I won’t be surprised if one of these days, I find myself checking out more Korean establishments for a more challenging intermediate level. 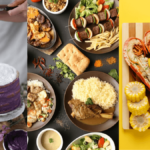 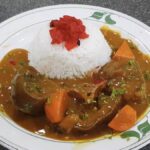 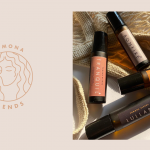 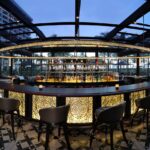 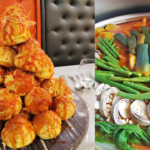 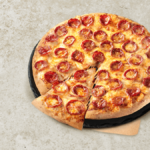