I know I used to call takoyaki, 'takoyucky'. But that was until I paid Octoboy a visit.

I will never forget the day I had my first takoyaki, a.k.a., the day I almost puked on my boyfriend’s shirt. That was early on in our relationship—during those times when first this-and-thats were our main agenda. We were strolling along a certain mall when we saw a queue in front of a takoyaki stand. Takoyaki balls weren’t that popular back then. Naturally, a food trip light bulb switched on. Eager to let me try my first takoyaki, he bought one serving for us to share. Expecting something like squid balls, I pricked my still steamy ball with my toothpick skewer then chucked the entire thing into my mouth. What followed was a deliberate state of confusion— more serious than what I usually experience when faced with a math problem. My mouth, upon tasting the unexplainable sort-of-fishy flavor, slowed down in chewing. It was undeniably baffled by the strange and funky party occurring inside. I wish my gag reflex had just acted then. That would’ve been better than being torn (and tortured) for a few seconds, unsure whether or not I should swallow or spit the nasty glop out. Though I was very convinced that I want not a nibble of that awful ball in my system, I swallowed it as easily as I’d gobble down a coin. I still shudder thinking about what I’d done. 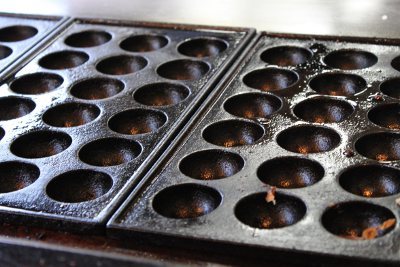 As expected, I never went near a “takoyucky” ball since then. I never even dreamed of touching one again. I was pretty sure then that I’ll be living the rest of my life without eating another piece. That was, until I encountered a friend, who swore to the heavens that a restaurant along Tomas Morato will likely change my mind. After a long period of convincing (or more like, forcing), I gave in. Surprise, surprise! She was right. I know I used call takoyaki, takoyucky. But that was, until I paid Octoboy a visit. 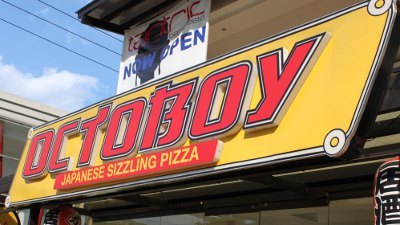 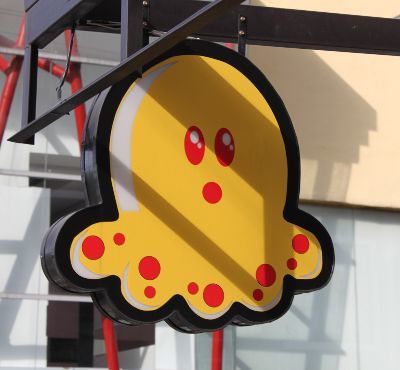 “Hindi yun gawa sa octopus,” Giovanni Cheng told me, referring to the nasty ball I encountered years back. The owner of Octoboy Japanese Sizzling Pizza proceeded on giving me rough calculations on how much he spends for a kilo of octopus. Simple math showed how unlikely it really is to buy real octopus for over a thousand then sell takoyaki for a little over twenty pesos. “Hindi talaga kaya,” he assured me. 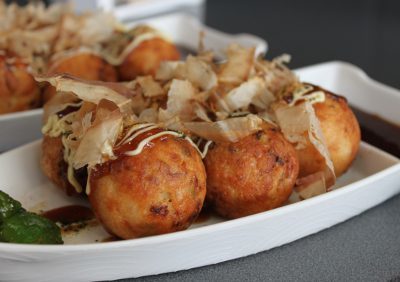 But since math isn’t my forte, I had to use my mouth to enlighten me on that matter. Hesitant, I took a tiny bit of Octoboy’s best seller, Takoyaki Octopus (P120 for 6 pcs.), just in case my friend is wrong and I again find myself in a gagging situation. 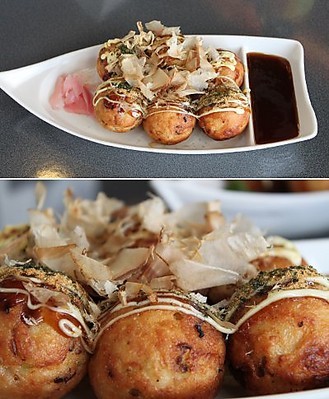 The bit that I had tasted like food– nothing like the fishy trash I had before. It’s soft as a pancake but is moist. I took a bigger piece. This time, I was able to pick up a faint flavor, familiar to the Japanese noodle dishes I’m fond of. I would like to think that this memory-recalling ingredient is hon dashi, but then again, it’s subtle to be distinguished properly. Onion here and there is evident amidst the mush that’s merely a flour mixture. And there it was. A gummy cube that’s just a tad more flavorful than squid. That must be the octopus. It should be. Salty, chewy, and palatable, the octopus did not induce a gag reflex at all. In fact, I didn’t mind its many other pieces well scattered inside the ping pong sized ball.

The soft mush was especially great with the sweet-salty takoyaki sauce that came along it. Add to that a drizzling of mayo, a peppering of dried seaweed bits, and a virtually tasteless but intereting katsuoboshi (fish flakes), you’ll get a flavorsome ball that is not one bit repulsing. Had I tasted this kind of takoyaki— the real one made with real octopus—back then, I would never have developed unnecessary hatred towards this Japanese snack.

But more than being enlightened on what the real takoyaki’s like, I’ve also found myself loving Octoboy’s other specialty: okonomiyaki. 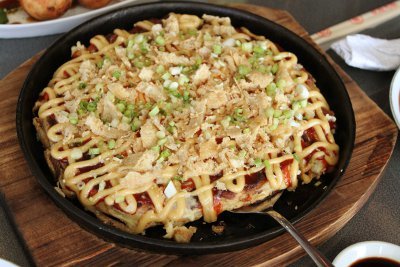 According to their informative menu, okonomo means “what you like,” while yaki translates to ”grill.” Just so the Filipino market will have a better idea on what an okonomiyaki is, Giovanni branded it as “Japanese Sizzling Pizza.” If I were to call it my own way, it’d probably be named “Eat Me and You’ll Never Be Sorry.” 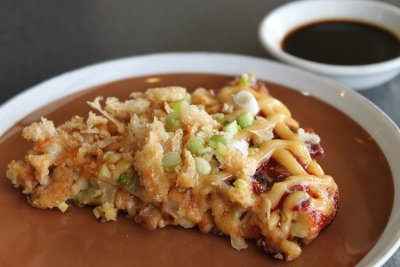 I had the Chicken Okonomiyaki (P290), which came with high commendations of the server. When the dish landed on the table, I thought it looked more like an over decorated omelette than a pizza. 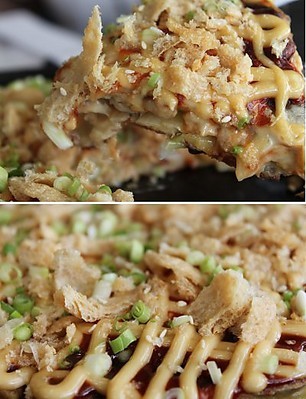 A slice is soft and fragile, but compact enough to be cut and transferred to a personal plate. Not sure what to expect, I took a bite from it, and soon, the wonderment ensued. The flavors from that single bite were highly variegated, but were not confusing at all. Initially, the sweetness of the chicken teriyaki was most evident. The notes of mirin and soy from it went off loudly. While enjoying this sweet sensation, chili suddenly punches in, and then followed by some peanut mayo. I could not figure what role the mozarella played in here; it must have been the stringy and succulent thing that held the bits together. I was very happy with the merry mix of different flavors in the okonomiyaki slice that I got but the pleasure even doubled when I drizzled black vinegar on top. After then, it became a party of contrasting flavors in my mouth. It was perfect, just perfect. 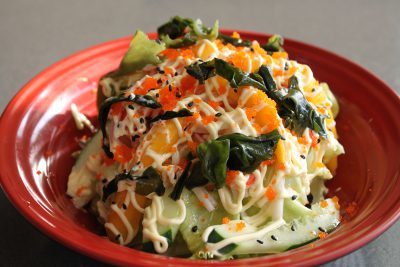 I will never forget the day I first had my first real takoyaki, a.k.a., the day I started with a new addiction. It was a lovely afternoon in Octoboy. I took a piece from my steamy ball with a fork, then chucked it into my mouth. What followed was a new found love affair— one I don’t think I’ll ever tire of. Thanks, Octoboy. I’m so happy we’ve met. 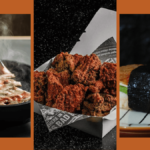 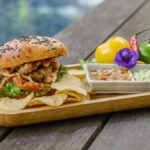 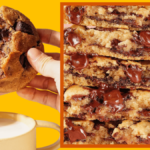 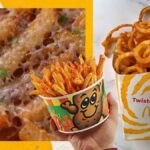 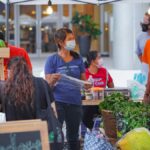