Treat yourself in this island getaway with its picturesque views that go beautifully with their flavorful food offerings.

Coron, Palawan, is one of the most beautiful local destinations I have traveled to. The beautiful sight of bright skies dipping on clear turquoise waters; The feeling of sand under your bare feet as you walk under the sun; the morning sunshine's heat prickling your skin for that eventual beach glow — one cannot get enough of these during the summer, and having all of that in Coron is unforgettable. My trip was made more memorable as our home for the weekend was Two Seasons Coron: a new high end resort for those wanting a total luxurious escape from the often maddening city life. Cliché as it may sound, but Two Seasons is truly paradise found. 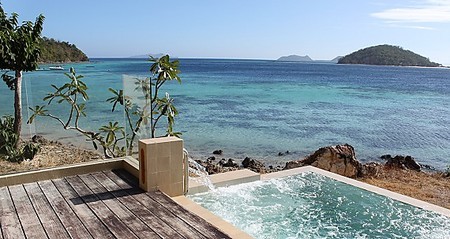 To experience the luxe life for two nights in the resort's beautiful bungalow with a jacuzzi all to yourself is enough to spoil one's senses. But discovering their food in Sulu Restaurant and sampling their head chef's creative customized dishes definitely upped the ante for top-notch resort cuisine. At Two Seasons, an island getaway with picturesque views is beautifully paired with their flavorful food offerings. 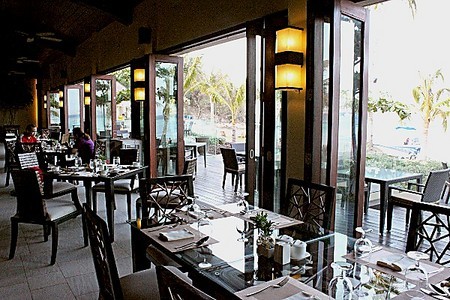 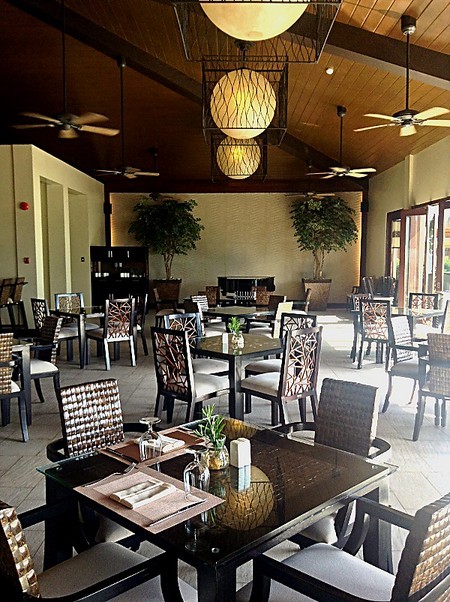 Al fresco by the sea

If you are familiar with the food of Two Seasons Boracay, then expect the same attention to great flavors in the Coron resort, as Chef Gene Gonzalez is at the helm of both resort's culinary consultancy. In Coron, Chef Ryan Patrick Dimapilis is appointed the head chef; he has been handpicked by Chef Gene, his mentor at Center for Asian Culinary Studies. 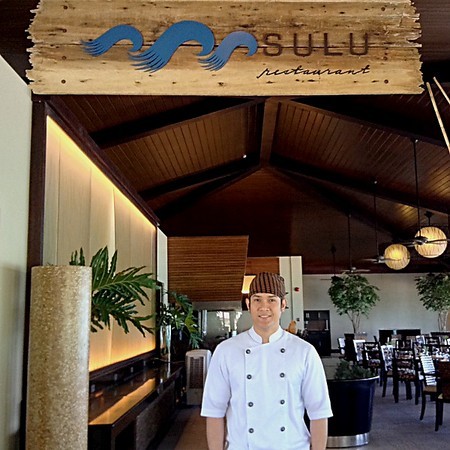 A couple of refreshing cool beverages is recommended to partake on if you're by the beachside. While I usually go for the no-fail palate pleaser of Fresh Orange Juice (P280), the resort's signature drink, Two Seasons (P280), is a best-seller. It's a sweet and merry medley of the flavors of zucchini, honey, and calamansi served chilled in a glass. The Two Seasons was also our complimentary welcome drink upon arrival at the resort. 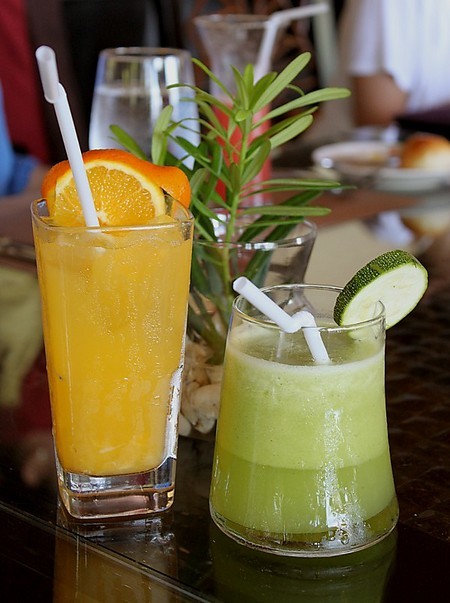 As you are already by the sea, make the most out of its bountiful flavors by starting your lunch with some fresh seafood in your salad. A chef's recommendation, the Octopus Ceviche with Papaya Salad (P350) is a bowl of bite sized chunks of fresh octopus tossed with papaya salad. The tanginess of their version of ceviche comes from a Thai dressing marinade. While I had this dish for lunch, I can imagine this to be a great beer match for that hot afternoon of procrastination by the poolside. 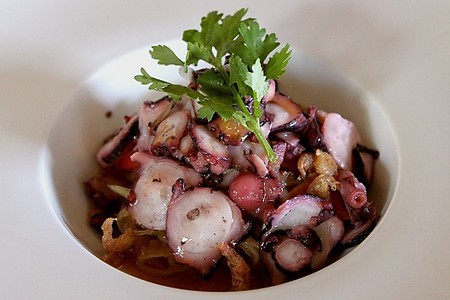 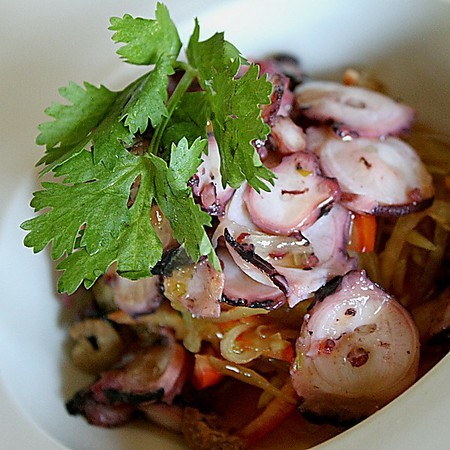 When in Boracay, they say never to miss out on Two Season's pizza, and we can say that as well for its Coron counterpart. They have included the very popular Four Cheese Pizza (P650) as part of Sulu's menu, and we're all the better for it. At first bite I am immediately reminded of my last encounter with the pizza just one month prior to the Palawan weekend, and it is just how I remember it. Thin and crisp, enough crunch in the crust, and smothered with lots of cheese: blue, cheddar, mozzarella, and parmesan. 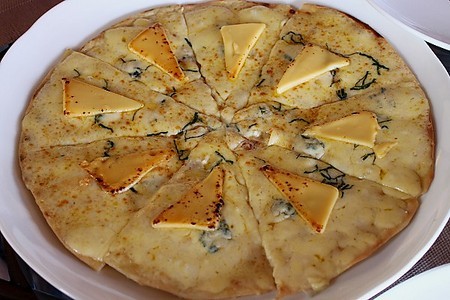 We try a couple more chef's recommendations, this time dividing our table of hungry folk into who's adventurous with food and who's more into tried and tested dishes. I lean hard on the former persuasion, so I had my share of Crocodile in Coconut Milk (P550) served with steamed rice. It was my first time to eat crocodile meat, so having it with gata, a personal favorite, was an easy introduction of the reptile meat. I am also assured of the quality of the meat, as Sulu only uses hygienically farm-grown Palawan crocodile, fed daily with chicken and pork. They even printed on their menu their NMIS permit number to assure diners that they are only served the best meat for their crocodile dish. Stewed in fresh creamy coconut milk, the dish is mildly spiced with chili pepper. It was interesting to chew on the crocodile meat–to my palate, it seemed a cross between white fish (such as dory) and white chicken meat. The texture had some bite to it. It's both familiar and foreign, something you should try at least once. 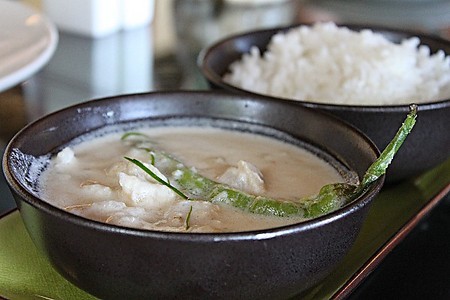 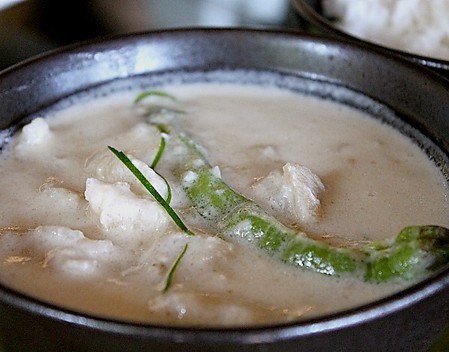 Seeking more familiar flavors? How about some classic Crispy Pata (P800) as beach grub at Two Seasons? Best shared as it is good for two (or even more), this
chef's recommendation is your homey Pinoy comfort food of pork hock deep fried until golden and crispy. It comes with rice and Asian sauce. For a western comfort food option, they have Grilled Salmon Steak (P700) topped with saffron cream sauce, and served with finely mashed potatoes and buttered vegetables. For dinner, I recommend their Prawns Maricudo with Garlic Basil Rice (P650), four plump pieces of prawns that are cooked in basil, capers, and roasted pepper to give your tastebuds varying textures and flavors in every bite. 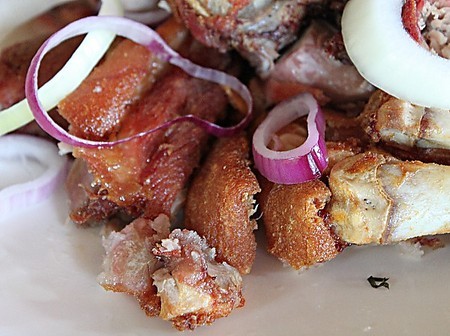 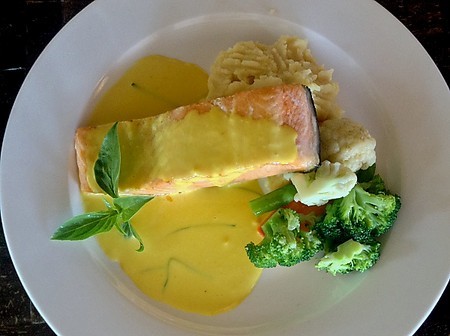 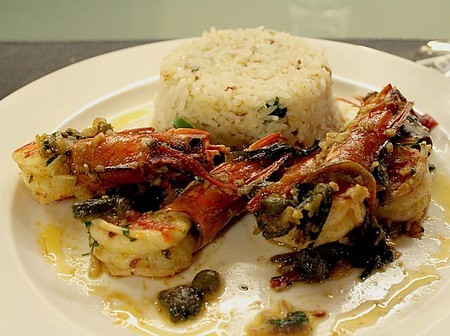 Now if you really want to twist things up with resort cuisine, challenge
Chef Ryan Patrick Dimapilis' culinary creativity by requesting something that is off the menu. "I'm really into molecular gastronomy right now," the chef shares, adding that he has been experimenting a lot with flavors, ingredients, textures, and presentation. For dinner, we were able to have a sneak peek of how the chef can exquisitely pull off unusual dishes. 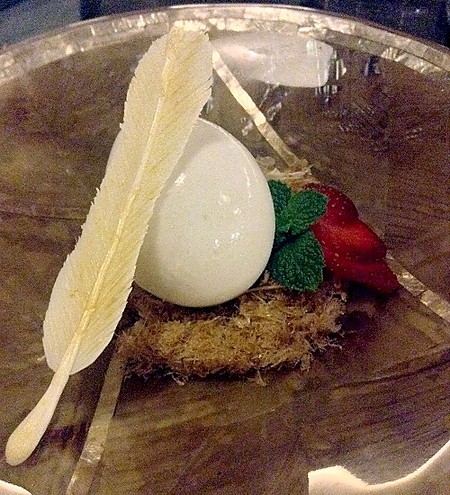 A fine example of the chef's talent is his beautiful creation simply labeled as Leche Flan. The dish mimics nature with a bowl housing an egg and its nest. It looks too pretty to eat, and we all marvel that this is actually an edible creation, our dessert for the night. The egg has a sugar shell, and cracking it reveals an inside filled with leche flan custard. Its nest, made from coffee, is prepared by the chef with the same technique as how one creates cotton candy. The feather leaning on the egg is white chocolate. How unique and inventive is this dessert?

Mornings at Two Seasons still remain delicious, as you wake up to a spread of breakfast classics in their buffet. Breakfast buffet is served whenever the resort is on a mid to high occupancy status, so you may inquire about this when you are booking your accomodation. 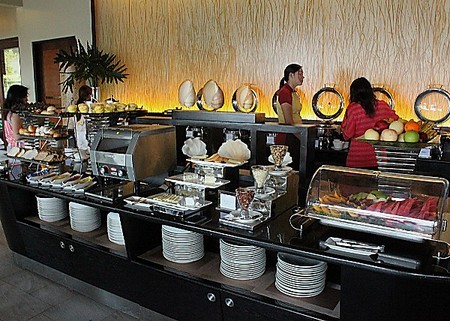 Sunday was a buffet morning for us, and I found myself filling my plate with sausages, cheeses, and the local favorite, lamayo. Lamayo is Coron's version of danggit or marinated and dried fish. Dip the pieces of butterflied fish in spiced vinegar, and eat it with rice, for a very traditional local breakfast. Their breakfast buffet also features items like canton bihon, tocino, molo soup, a congee station where you can top your bowl with assorted condiments, and a separate island for breads, spreads, jams, cheeses and nuts, and assorted fresh fruits. 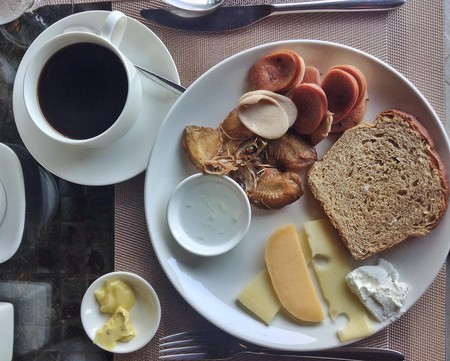 No breakfast buffet? Not a problem, as Sulu's a la carte breakfast offerings have a wide variety of cuisines to choose from. Choose among Continental, American, Oriental breakfasts, pancakes or waffles, omelettes and French toast, and seasonal fruits. Most of us opted for the Filipino Breakfast (P600), where you start out with fresh fruit juice (orange, pineapple, watermelon, apple, or seasonal fruit platter). For your choice of meat, there is lamayo, beef tapa, pork tocino, longanisa, or daing na bangus. You also get two fresh farm eggs prepared to your liking, and garlic fried rice with onion and tomato. Aside from the juice, you also have freshly brewed coffee, tea, or tsokolate. 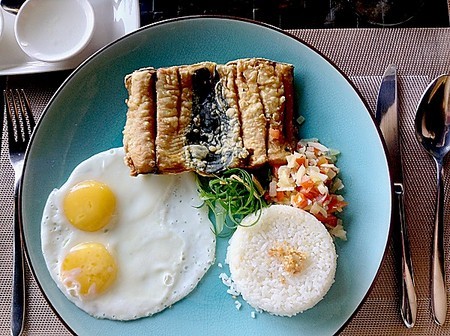 My last meal at Two Seasons Coron may be the simplest among the many I've feasted on over the weekend, but it was immensely satisfying. Bangus-silog will always be a comfort food staple for me. And often I find that the simplest breakfast meal, done perfectly, can cap your mornings just beautifully. A beautiful breakfast has its special way of leaving you with enough happy energy to move onward and forward with whatever's in store for the day.

Sulu Restaurant is located beside the resort lobby of Two Seasons Coron Island Resort & Spa in Malaroyroy Peninsula, Bulalacao Island. Experience their continental cuisine daily from 6am to 10pm. Your stay at Two Seasons includes daily breakfast at Sulu, with buffet breakfast served on a mid to high occupancy status. Visit http://www.twoseasonsresorts.com/coron/ for more information. 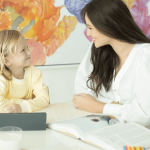 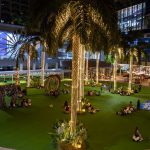 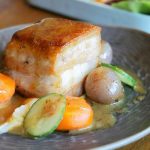 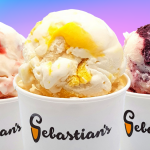 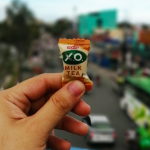 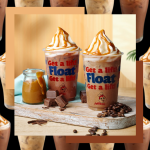