Instituto Cervantes, the cultural arm of the Embassy of Spain, is organizing a series of colloquia by Filipino intellectuals about aspects of Filipino identity with Hispanic traces, to be held at its Intramuros branch in Plaza San Luis Complex, Real St., Intramuros. 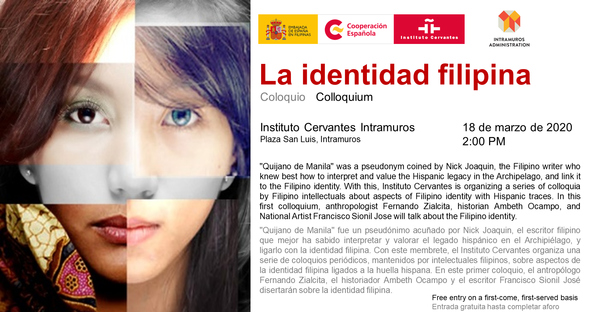 The first colloquium in the series, which will be held on March 18, Wednesday, at 2 PM, will be about the view of Filipino identity by writer Nick Joaquin (1917-2004), arguably the contemporary Filipino who knew best how to interpret and value the Hispanic legacy in the Archipelago. In this discussion, historian Ambeth Ocampo will present the historical setting during the important milestones in the life of the National Artist for Literature, while fellow National Artist Francisco Sionil Jose will focus on his friend as a literary figure and as a person, and anthropologist Fernando Zialcita will talk about the Filipino identity as envisioned by Nick Joaquin, also known by his pseudonym "Quijano de Manila."

Dr. Fernando Zialcita, who obtained his M.A. and Ph.D. in Anthropology from the University of Hawaii, teaches at the Department of Sociology and Anthropology at the Ateneo de Manila University and heads the Cultural Heritage Studies Program. He specializes in Heritage and identity, art and its cultural context, and interfaces between the foreign and the indigenous. Dr. Zialcita has written various articles on the Spanish influence on the cultural identity of Filipinos.

Dr. Ambeth Ocampo, former chairman of the then National Historical Institute, is a history professor at the Ateneo de Manila University as well. He was awarded the Premio Manuel Bernabe by the then Centro Cultural de la Embajada de Espana en Filipinas and a Premio Quijano de Manila from the Instituto Cervantes Manila.

National Artist for Literature, Francisco Sionil Jose, received awards both in the Philippines and in other countries. His novels and short stories, which depict class struggles and colonialism, have been translated into 28 languages.

The lecture is open to the public. Admission is free on a first-come, first-served basis. For further information, please check out Instituto Cervantes’ Facebook page:  www.facebook.com/InstitutoCervantesManila, or call Instituto Cervantes at +632-8526-1482.