The Japan Foundation, Manila, in collaboration with Ayala Museum and Ayala Malls, with the support of Ateneo de Manila University Japanese Studies Program, Arete, and the Embassy of Japan in the Philippines, presents Contemporary Wood-Carved Netsuke, a traveling exhibition to open at Ayala Malls Greenbelt 5 from July 1 to 21, 2019. Viewing is free. 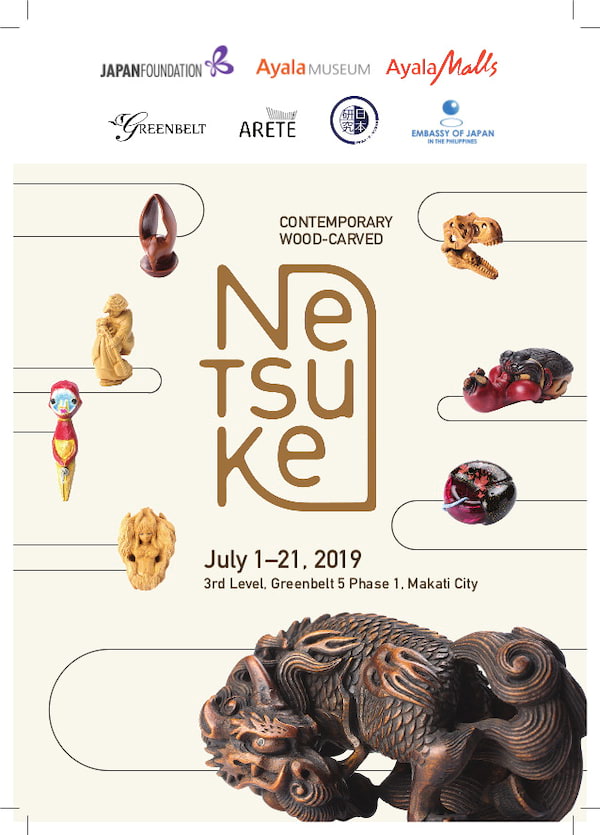 As kimono culture flourished during the Edo period in Japan (1603-1868), netsuke, small carvings, were created as toggles to secure the small personal items such as money pouches, inrō (medicine containers), or tobacco containers worn suspended on cords from the obi (a sash worn with kimono). What began as functional pieces to prevent those little containers from falling to the ground evolved into small but highly creative carvings. In Japan, some netsuke enthusiasts and carvers have managed to keep the tradition alive. Today, classic netsuke have gained international acclaim as remarkably detailed carvings, collected as valuable art pieces or worn as fashion statements with traditional Japanese clothing.

“Netsuke is unique in that daily commodities have evolved into an art form in the course of time. I believe viewers can enjoy and appreciate the delicate work of art created by Japanese craftsmanship." shares Hiroaki Uesugi, director of The Japan Foundation, Manila.

A series of special events are also lined up to complement the Netsuke exhibition. We have invited two renowned netsuke artists and experts from Japan, Mr. Tadamine Nakagawa and Ms. Asuka Kajiura, to give a talk, demonstration, and workshop on netsuke, together with a talk by Dr. Karl Cheng Chua from Ateneo de Manila University.

In celebration of Philippine-Japan Friendship Month this July, the exhibition run also coincides with the 22nd Japanese Film Festival or EIGASAI, screened in film theaters around the Philippines, and The Strangers, a dance collaboration to be held at the Blackbox Theater, De La Salle-College of Saint Benilde.