Now on its third year, the Atlantis Musical Theater Workshop returns bigger than ever this summer! 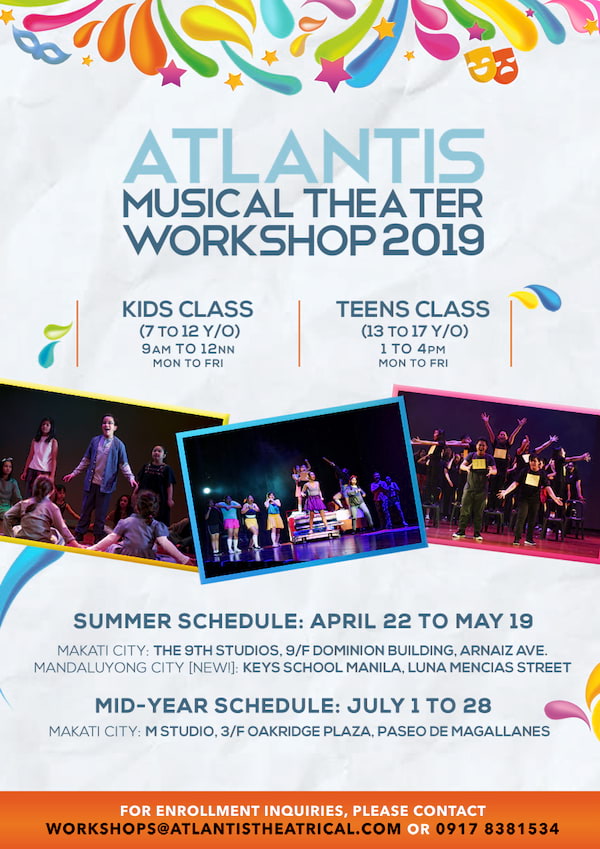 Due to popular demand, the summer workshop for kids and teens will be offered at two venues starting April 22. Choose between The 9th Studios, 9/F Dominion Building, Arnaiz Ave., Makati City and Keys School Manila, Luna Mencias Street, Mandaluyong City. Classes for kids (7 to 12 y/o) will be held daily from 9am to 12nn, while classes for teens (13 to 17 y/o) will be held from 1 to 4pm. Atlantis veterans Steven Conde, Sarah Facuri, and Mica Fajardo will spearhead classes, and teach the rudiments of singing, acting, and dancing for musical theater. The workshops will culminate with recitals at the RCBC Theater on May 18 and 19 at 3pm.

Mid-year classes for kids and teens will also be offered from July 1 to 26 at M Studio Magallanes, 3/F Oakridge Plaza, Paseo de Magallanes, Makati City, with recitals on July 28 at the RCBC Theater.

And as a special treat on its 20th anniversary, Atlantis, through its Advanced Musical Theater class, will be staging a fully licensed and professional production of RENT School Edition on May 18 and 19, 8pm, at the RCBC Theater. One of the most groundbreaking musicals of the ‘90s, RENT was Atlantis Theatrical’s maiden production. RENT School Edition will be directed by Steven Conde, with choreography by Cecile Martinez. Tickets will be available soon.

Over the past few years, Atlantis Theatrical, in partnership with Ten Bridges Media, has given birth to several very well-received productions including Ghost the Musical, Shrek the Musical, Rock of Ages, Saturday Night Fever, Jersey Boys, Fun Home, Kinky Boots the Musical, Matilda the Musical, and Waitress.