Following the success of last year’s run, CREATIVE NIGHTS is back at the Ayala Museum this February 8, 2019! Expect a night of unbridled creative inspiration, celebration and collaboration, designed for the creative community. 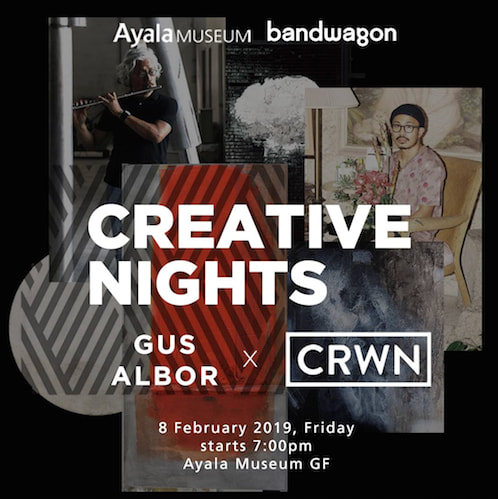 True to the spirit of bringing two art forms together, Ayala Museum has collaborated with Bandwagon Philippines, a music website that advocates the support of Asian music across Southeast Asia. Together, they have curated the second Creative Nights, bringing together internationally renowned abstractionist Gus Albor and Manila-based producer and beat maker CRWN.

Be inspired beyond the canvas and the stage

During Creative Nights, the museum is transformed into a space of inspiration and expression where they can not only see art, but also make art themselves. Attendees are given the opportunity to experience art beyond Gus Albor’s exhibit and CRWN’s performance by providing them with various art materials that they can use to create their own art.

Combining music and art to produce masterpieces, Creative Nights is especially for those who seek to find magic in the mundane of everyday commute, already excited to start their weekend. While the performance starts at 7:00 PM, the audience is invited to arrive earlier to take a break, appreciate art and have a drink or two on a hectic Friday night.

“I get inspired by many things: life itself, simple objects or forms, political facts, scientific and spiritual matters. When they categorize my art it falls under the name or category of non-representational. You can also call it minimalist abstraction. It’s basically subconscious.”

- Gus Albor, on what inspires his art

The recipient of the prestigious CCP 13 Artist Award, among many others, Gus (Agusto) Albor has been a stalwart of the Philippine art scene since the 1970s. His works have been shown in exhibitions in Germany, Italy, Japan, France, and the United States to name a few.

At the moment, the museum is hosting the biggest gathering of his works: ‘Territory.’ The exhibition features oil on canvas paintings, mixed media works, paper-based illustrations, large-scale sculptures, and installation art works that manifests Albor’s distinct partiality for minimal color registers, with extreme subtlety, soft transitions, and muted harmonies.  His works occupy two of the Ayala Museum galleries with masterpieces from 1969-2018.

“I just wanted to capture a simple, normal moment where I was at peace. Which was the motif feeling I wanted to express for Orchid. I wanted Orchid to be a soundtrack for the listener when it came to stepping back from their lives to reflect."

- CRWN, on his newest beat tape (via Bandwagon PH)

What began as a bedroom project is now making waves all over the music scene. CRWN, also known as King Puentespina, has long unleashed powerful beats and tunes, collaborating with the likes of Clara Benin, Jess Connelly, Mark Redito, and BP Valenzuela. He has also performed in many festivals here and abroad, such as Wanderland 2015 and 2016, Malasimbo 2015, 2017, & 2018, Bandwagon Music Market (PH) 2016 and Bandwagon Riverboat (SG) 2016. Last year, CRWN released his newest beat tape Orchid, ten tracks gifted with a sense of relaxation and reflection, bringing listeners to a state of zen.

VIP tickets are exclusively available at Ayala Museum and are inclusive of priority seating, a meet-and-greet with the artists, an exhibit tour with our senior curator, and other exclusive offerings. All ticket tiers include access to Gus Albor's Territory exhibit.