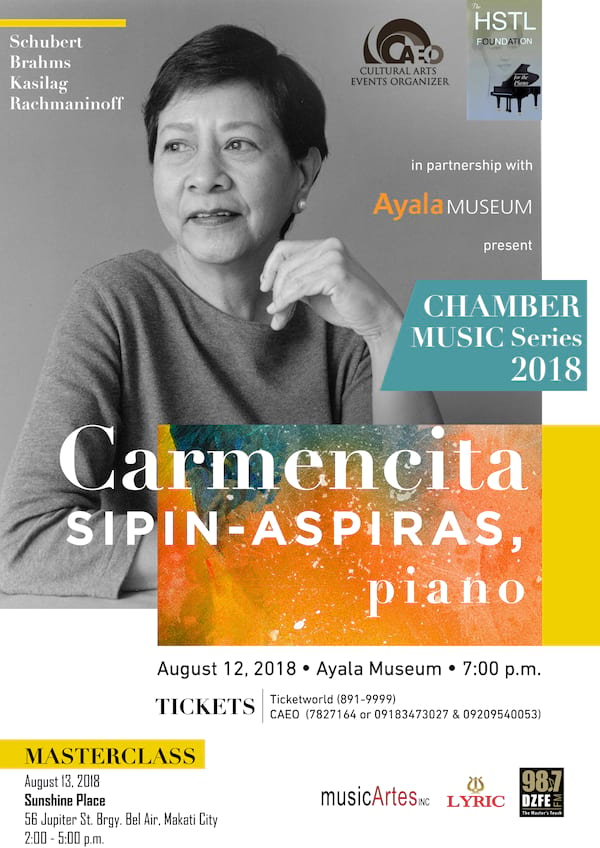 As part of CAEO Chamber music series,  Ms. Aspiras will be performing Rachmaninoff/Kocsis Vocalise,  Schubert's Piano Sonata in B-flat major, D.960 and  Brahms's Seven Fantasies, Op.116.  Ms. Aspiras will also conduct a masterclass on August 13 from 2:00 p.m. to 5:00 p.m. at the Sunshine Place 56 Jupiter St. Bel Air  Makati City.  The masterclass is open to the public for free.

A former child prodigy who made her orchestral debut playing the Mozart Concerto in D Minor, KV 466 at 11, Ms. Aspiras has become a widely acclaimed concert pianist praised especially for her great sensitivity and intelligence.

Born in Manila, Ms. Aspiras was first taught by her mother, an amateur pianist, before she studied with Hermogenes de Guzman. At 11, she was the youngest student enrolled at the University of the Philippines’ Conservatory of Music where she studied with Juan Banez, then with the Dean of Philippine Women’s University College of Music, Lucrecia Kasilag until her graduation with honors at the age of 17.

She was awarded a scholarship grant by the Music Promotion Foundation to study at the Vienna Academy of Music (now Vienna Music University) in Vienna, Austria, where she earned her Concert Artist’s Diploma.

Her numerous performances in the Philippines included an all-Rachmaninoff recital as the first pianist presented by the Cultural Center of the Philippines (CCP) in the Filipino Artists Series. The CCP chose her to give the Philippine premiere of Sir Michael Tippett’s Concerto with the composer conducting. Sir Tippett said of her performance: “It was of the highest quality and she struck me as a musician of great sensitivity and intelligence.”

Ms. Aspiras was a much sought-after concert pianist and adjudicator in NAMCYA competitions, a role she continues to play in local competitions in the US where she and her family have been living since 1989.

Her US concerts have taken her to various parts of the country but mostly in the San Francisco Bay Area where she resides.