MTV Music Evolution Manila is back for more fun again in the Philippines! Tourism Promotions Board (TPB) Philippines reprises its collaboration with MTV, a unit of Viacom Inc. (NASDAQ: VIAB, VIA), and marks the return of MTV Music Evolution Manila to the Philippines on Friday, 24 June 2016. This will be the second year the award-winning* show will be held in the Philippines and in 2016, the one-night only live music event will celebrate pop music like never before – enabling fans to experience and discover the evolution of pop music and its dance influence that keeps fans moving. MTV Asia reveals its first act, iconic international pop band and prolific hitmaker, OneRepublic, who returns to the Philippines for its second performance since 2013. 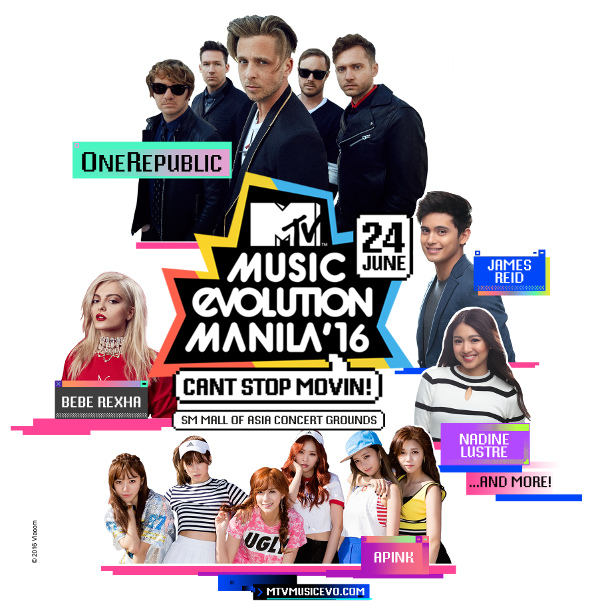 “Stoked to be going back to Manila again! We can’t wait to meet everyone for an awesome dance party at MTV Music Evolution Manila 2016!” – OneRepublic

Despite starting their career as an alternative rock band, OneRepublic has emerged as one of the biggest pop bands over the last decade, integrating dance influences successfully in several of their international iconic pop hits like its smash “Counting Stars”, “Secrets”, “Feel Again”, “Love Runs Out” and more. The band has a sound signature recognizable everywhere by its legions of fans, with their music played in clubs, including club remixes. OneRepublic has also collaborated with world acclaimed DJs such as Alesso. The band has recently been in the studio recording their 4th album.

MTV Music Evolution Manila 2016 will showcase iconic and contemporary international music artists and the hottest new acts in both the regional and local music scenes on a single stage, while featuring the best of Philippine music and culture to international youth audiences. Further details of MTV Music Evolution Manila 2016, including venue and additions to the artist line-up, will be announced in the run up to the event. The free-entry** event is recorded live for global telecast under the MTV World Stage global series, to an international audience of more than three-quarters of a billion households in over 160 countries.