Still don't know where to go this payday weekend? Here are the events happening in the coming days!

Still don't know where to go this payday weekend? Here are the events happening in the coming days! 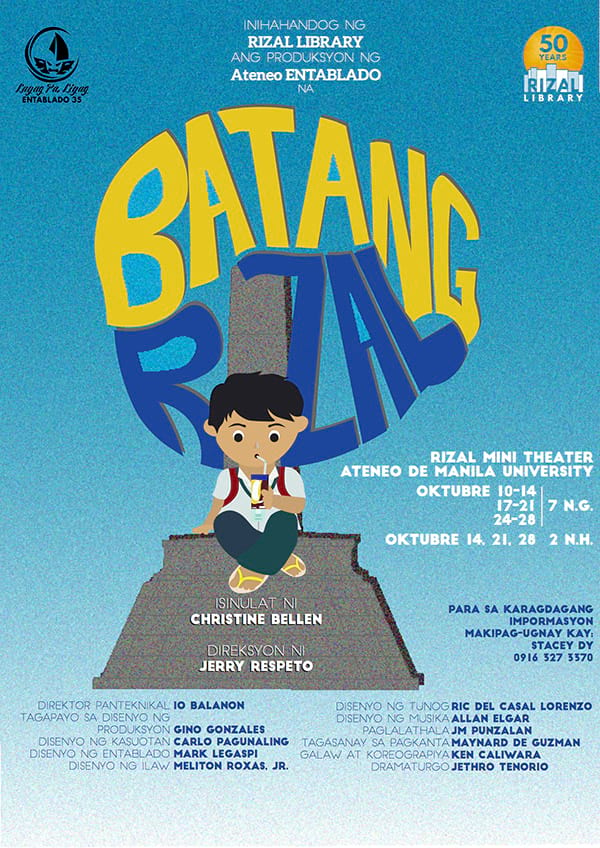 On the occasion of its 50th anniversary, the Rizal Library presents Ateneo ENTABLADO’s Batang Rizal, a children’s play about the young Jose Rizal, who graduated 140 years ago from what is now known as the Ateneo de Manila University, and whose best-known work—Noli Me Tangere—was published 130 years ago. The play, written by Christine Bellen and directed by Jerry Respeto, is set to run from October 10 to 28 at the Rizal Mini Theatre, Ateneo de Manila University. 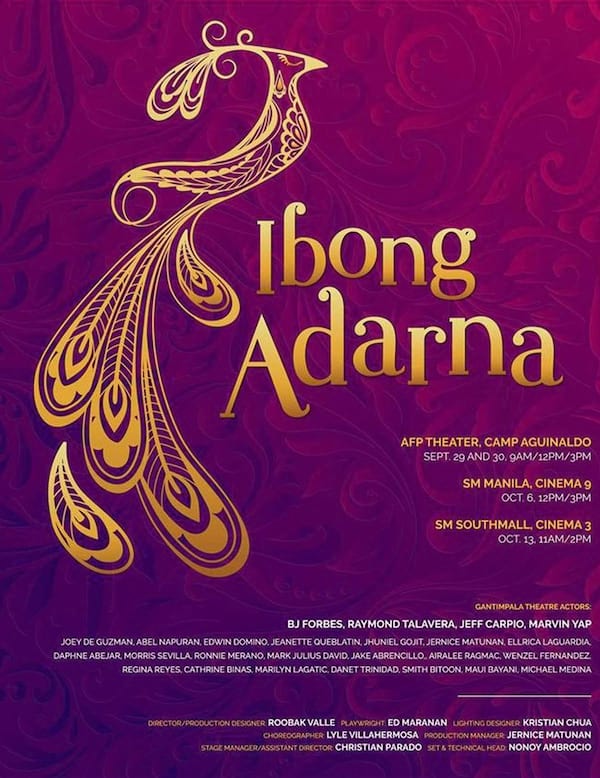 It's that time of year when the most popular bird in Philippine mythology and literature takes flight again to punish wrongdoers and reward the deserving.

IBONG ADARNA—as reimagined by playwright ED MARANAN, and given life by director ROOBAK VALLE and the actors of Gantimpala Theater Foundation—is now on its eighth year, as part of the GTF's 40th season. This play narrates the tale of the three brothers, Don Pedro, Don Diego and Don Juan, sent by their beloved mother Reyna Valeriana to capture the fabulous bird, whose magical songs serve as the only cure to Haring Fernando’s severe illness brought about by a nightmare soon to befall a favorite son. 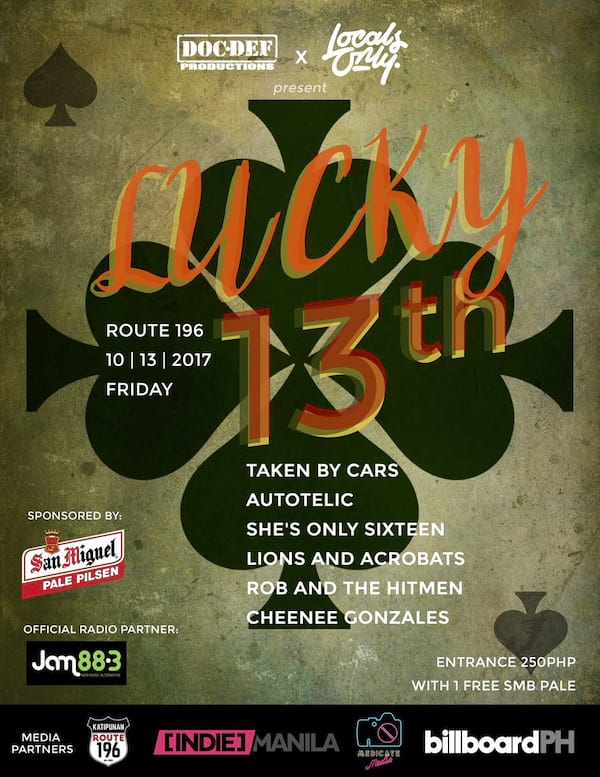 Celebrate Friday the 13th at Route 196 with good music as bands like Taken By Cars, Autotelic, She's Only Sixteen, Lions and Acrobats, Rob and the Hitmen, as well as Cheenee Gonzales, will be performing.

Entrance is at P250 which comes with a free bottle of beer.

Aside from Pedicab, acts like DMAPS, Rayms, Cheats, She's Only Sixteen, Kikimachine, GianGangBang, and Mulan will be keeping music-lovers company during Friday the 13th at XX XX in La Fuerza Plaza in Makati.

Ampalaya Monologues: Two Is Bitter Than One 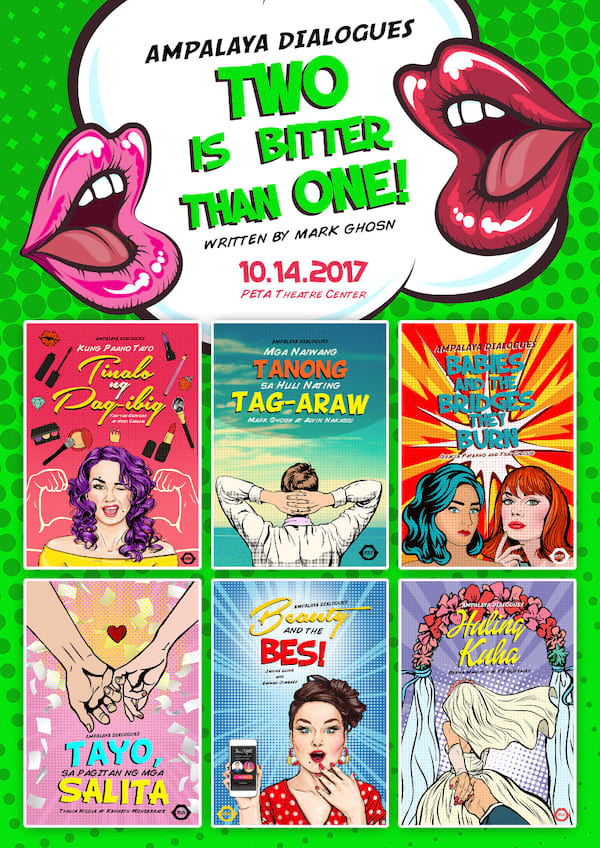 To celebrate two years of artistic bitterness, the team from Ampalaya Monologues have decided to double up the bitterness with a one-night only anniversary show “Ampalaya Dialogues #TwoIsBitterThanOne” on October 14 – Saturday from 7 pm – 10 pm at the PETA Theater Center located at Eymard Road, E. Rodriguez Q.C.

Ampalaya Dialogues #TwoIsBitterThanOne will showcase six short one-act plays that will feature two characters in each story. All of which are written by Mark Ghosn and will be performed by actors of Theatre in Alternative Platforms (TAP).

Limited tickets for this one night only event is P500 only and is available at Ampalaya Monologues facebook page facebook.com/AmpalayaMonologues. Please note that video taking will be prohibited during performances. 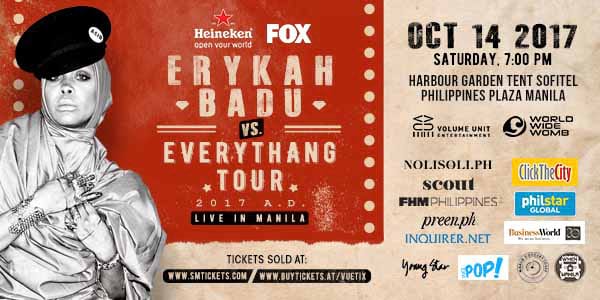 Neo-soul/Hip-Hop Queen Erykah Badu finally makes her way to the Philippines as she adds Manila as the last stop of her Badu VS. Everythang Tour 2017 A.D on October 14, 2017, at the Harbour Garden Tent, Hotel Sofitel Philippine Plaza, Manila.

Tickets range from P5775 to P9975 and are available at www.malasimbo.com, www.worldwidewombasia.com, and SM Tickets.

The Filipino Komiks Art Market (KOMIKET) will launch its biggest event of the year from October 14 to 15 at Centris Elements, EDSA corner Quezon Avenue, Quezon City.

Over 450 komiks creators, illustrators and writers, ready to share their newest works, will be present during the event.

Tickets are priced at 100 pesos each. Check out the Komiket Facebook page for more details. 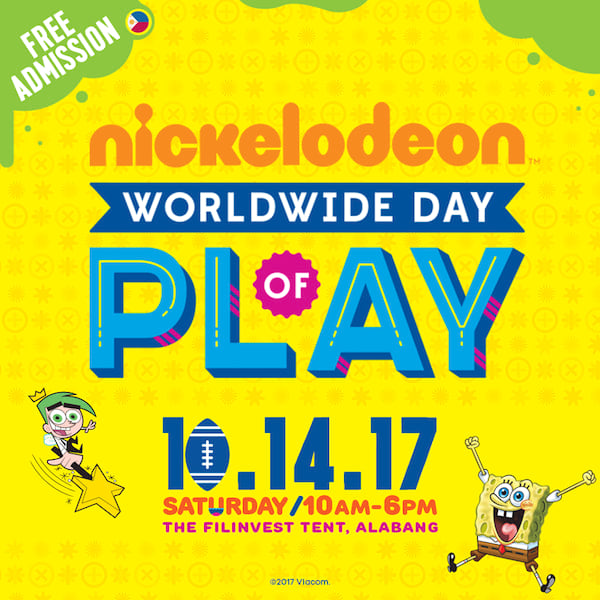 Mark your calendars on October 14, Saturday, and get ready for Nickelodeon’s ‘Worldwide Day of Play’ in the Philippines. An initiative to encourage kids to head outdoors with their families, this will be a free-entry event held at the Filinvest Tent, Alabang, from 10am – 6pm.

Attendees can look forward to games, fitness activities, and guest appearances by professional athletes and celebrities. Nickelodeon’s well-loved characters such as the Teenage Mutant Ninja Turtles, SpongeBob SquarePants and Patrick Star will also make an appearance.

For more details about the Worldwide Day of Play in the Philippines, visit http://www.nick-asia.com/win/dayofplayph/w9qani. 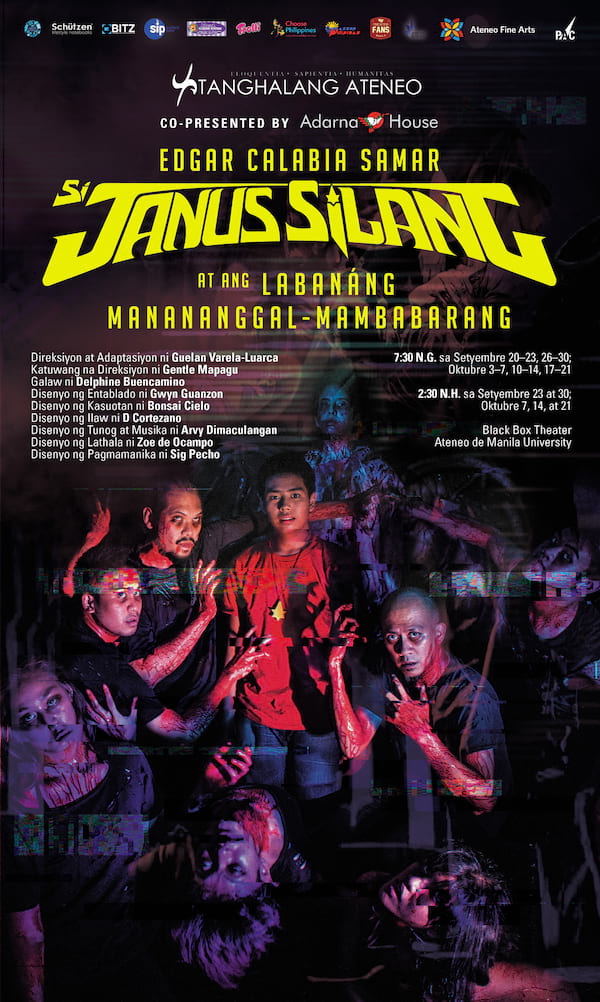 Si Janus Silang at ang Labanang Mananaggal-Mambabarang follows the titular character, Janus Silang, as he continues his search for Tala to defeat the threat of the Tiyanak to humanity.

Flow In The City: Wholesome Halloween 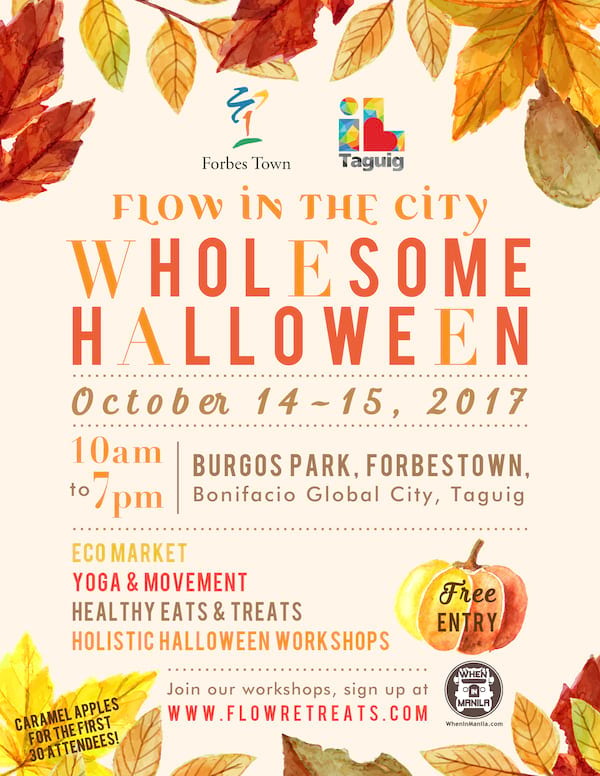 Flow In The City: Wholesome Halloween is a Halloween-themed outdoor weekend market with a twist on health and wellness featuring natural products and nourishing eats and treats.

Come by for trick or treat, children in costume get a special healthy treat, while the first 30 early birds get a free caramel apple!

To join the workshops, register at www.flowretreats.com. Sign up for 3 classes for only P1,000. 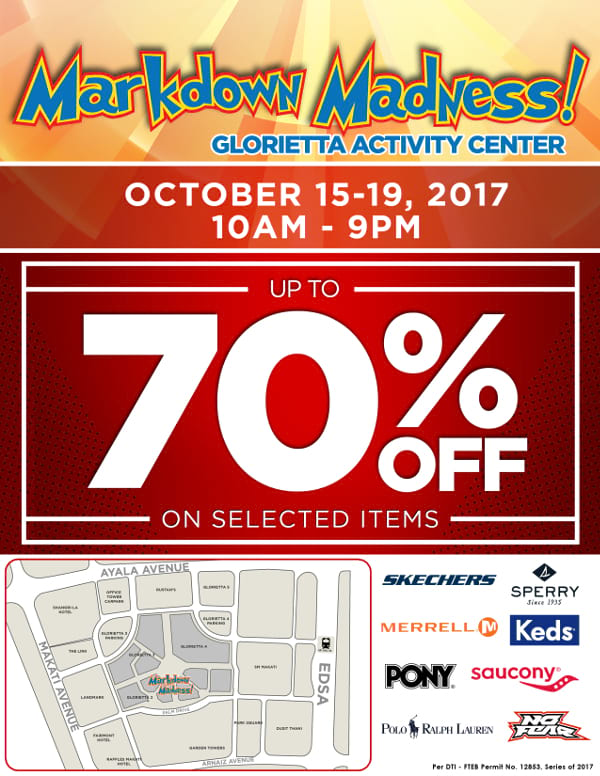 Markdown Madness, one of the biggest sale events in town, is happening once again to help you start off your pre-Holiday shopping!

Enjoy up to 70% discount from October 15 to 19, 10 a.m. to 9 p.m. at the Glorietta 2 Palm Drive Activity Center. Participating brands include: Skechers, Merrell, Sperry, Keds, Saucony, Pony, Polo Ralph Lauren, and No Fear.

October 15 (Church of the Risen God, UP Diliman) 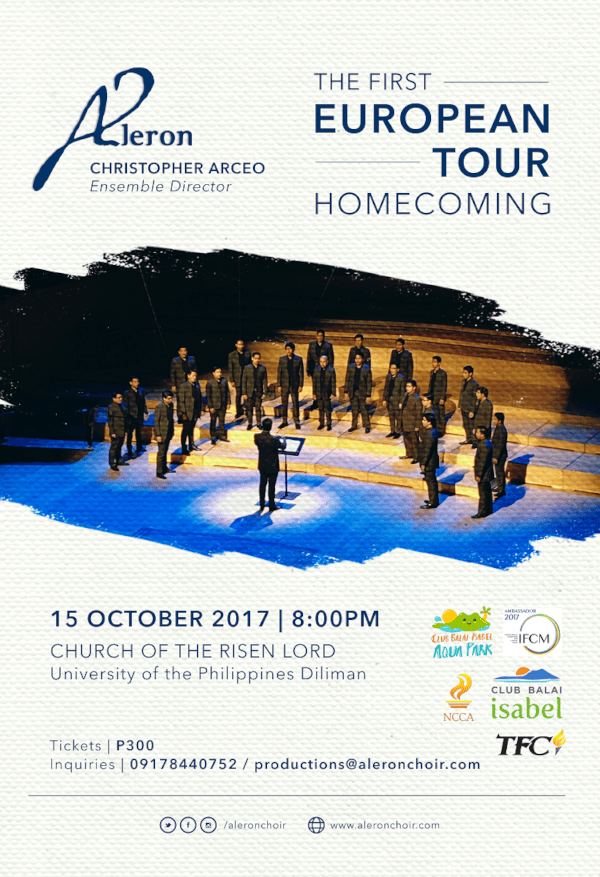 Aleron, an all-male choir based in Quezon City, will be in concert on Sunday, the 15th of October. The concert will be held at the Church of the Risen Lord inside the UP Diliman Campus at 8:00 in the evening. The concert will serve as a homecoming from their successful two-month European concert and competition tour.

Tickets may be purchased at PHP 300.00. For ticket inquiries and other questions, the group may be contacted via productions@aleronchoir.com, or +639178440752. 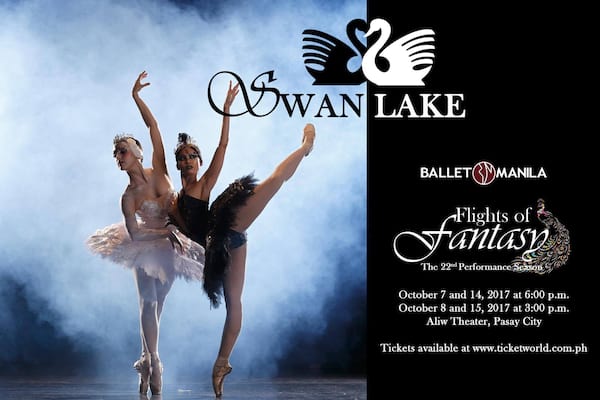 Ballet Manila brings back one of the world’s most enduring classical tales, the four-act Swan Lake, as the second offering in its 22nd performance season dubbed Flights of Fantasy.

This is the 11th time that Ballet Manila is presenting Swan Lake in its 22 seasons.

The Sound of Music

Running until October 22 (The Theatre at Solaire) 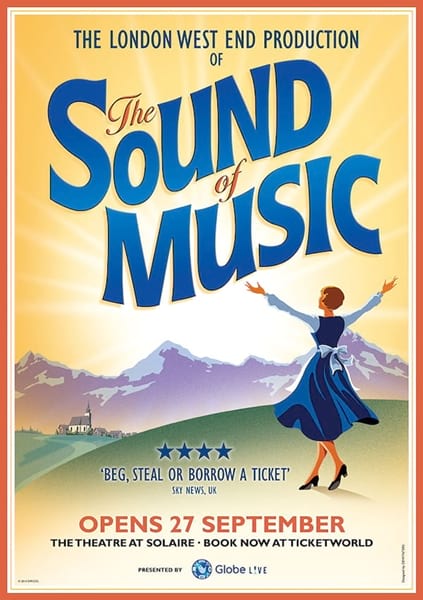 The world's best-loved musical, The Sound of Music, comes to Manila in September!

This lavish and critically-acclaimed production tells the uplifting true story of Maria, the fun-loving governess who changeds the lives of the widowed Captain Von Trapp and his seven children by re-introducing them to music, culminating in the family's flight across the Austrian mountains as tensions rise prior to the outbreak of World War II.

For tickets and other inquiries, please call TicketWorld at +632-891-9999 or email tickets@ticketworld.com.ph.